Chicago – Acclaimed adult film director / performer Dana Vespoli has been honored with nominations for Gonzo Release of the Year, and Best Sex Scene – Taboo Themed in the 2020 XBIZ Awards.

The nominations recognize Vespoli’s work in a year that brought the acclaimed director’s magnificent return to Evil Angel, helming and co-starring in controversial titles such as the acclaimed semi-documentary exploration of sexual freedom and responsibility, “Consent” ( https://www.evilangelvideo.com/video/6366/consent ) featuring Emily Willis, Whitney Wright and Ivy LeBelle, which is nommed for Gonzo Release of the Year, and the religious-themed “Ministry of Evil” ( https://www.evilangelvideo.com/video/6397/ministry-of-evil ) starring Julia Ann, Riley Steele, Silvia Saige, Victoria Voxxx, Kate Kennedy and Steve Holmes.

“I went from shooting roughly 34 movies a year to shooting around six movies in 2019,” said Vespoli. “That’s a huge change. What was nice about it was being able to really put time and energy into just a few projects, rather than deal with the anxiety of pre-production during production of the movie I was currently working on. “

“’Consent’ was a timely movie, a very personal and meaningful one, and a wonderful opportunity to collaborate with John Stagliano, who is a hero of mine and my raison d’être in this business, so to speak.”

Seasoned with theological references and blasphemous imagery, “Ministry Of Evil “ is set in a monastic order where people have their faith restored, and explores twisted kinks that religion inspires but nonetheless forbids.

Holmes has also received an XBIZ nomination for his role in the category of Best Actor — Taboo-Themed Release.

“I’m very happy that these particular projects have been recognized this year,” said Vespoli. “I had a lot of fun making these movies and am thankful to the cast and crew who did such outstanding work in them.”

The 2020 XBIZ Awards show will be held Thursday, January 16 at the JW Marriott L.A. Live in downtown Los Angeles. The red-carpet extravaganza is the capstone of the annual XBIZ trade show, which unites all segments of adult for boundless business opportunities.

A native of the San Francisco Bay Area and graduate of Mills College, Dana Vespoli entered the world of X in 2003 as a performer, with the goal of eventually directing her own films.

Vespoli has had a prolific output of genre-spanning movies for more than a decade, featuring boundary-pushing scenes renowned for their authenticity and intensity.

Tue Dec 3 , 2019
Chicago – For a lot of men, Thanksgiving is all about overeating and watching football, leaving the women to themselves. But in a new scene from Naughty America makes a strong case for skipping the sports (and maybe that third helping) and giving a little attention to the lonely ladies.  […] 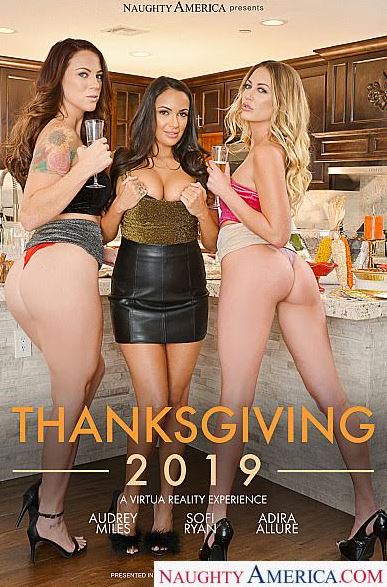