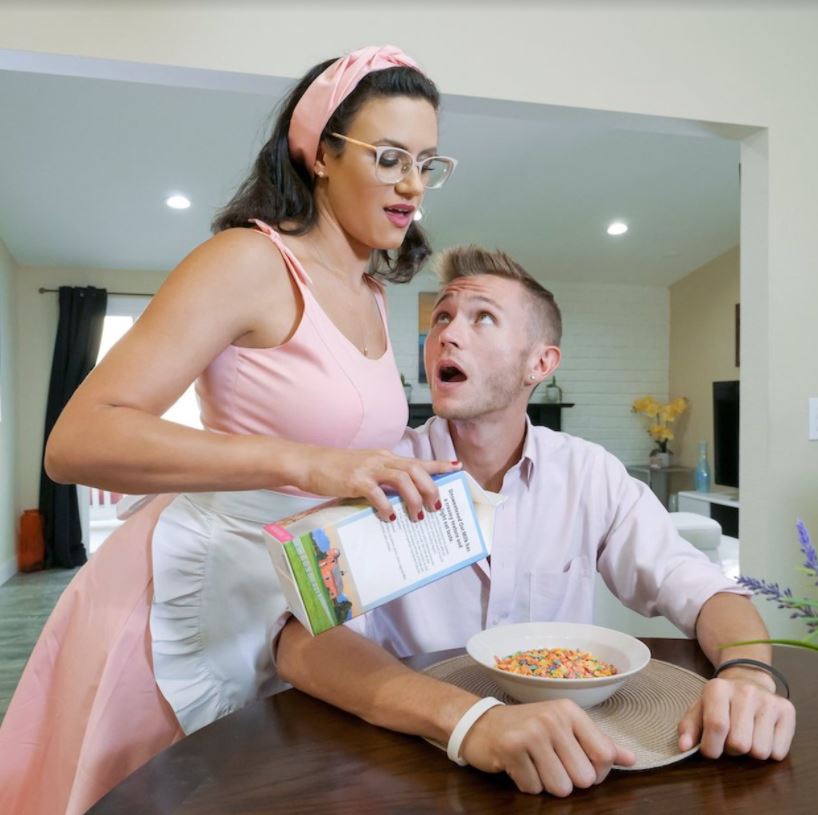 In “Don’t Leave Me,” Penny Barber is helping her stepson AJ get ready to go back to school after being homeschooled for a long time. Penny isn’t happy about it, but she’s making him breakfast and lunch. Dressed in a 1950s peach dress and headband with her infamous cat eye glasses, Penny’s doing everything in her power to keep AJ home. She tries to convince him to stay home by saying no one goes on the first day. Stepmom Penny even threatens not to drive him if he misses the bus. But what gets him to stay is when she shows her boobs and says, “They don’t have these at school, do they?” And then, it’s on. Watch the trailer and then the member-exclusive scene to get the full effect at mylf.com/movies/dont-leave-me.
“AJ was a lot of fun to work with—we had a lot of chemistry, and he played along with the script really well. II hope my fans enjoy every minute of it. And why doesn’t love a MILF dressed all 1950s?!” says Penny Barber.
And while you’re there, check out Penny’s previous MYLF.com scene “Concept: Perv Therapy” for the Mylf Labs series. She plays a shrink to stepsiblings Tristan Summers and Jay Romero. The two are in therapy after their stepmom caught them doing inappropriate things. But when Penny asks them to reenact what they were doing, things get naughty between the good doctor and her patients. Check it out at mylf.com/movies/concept-perv-therapy.
To get Penny on your set, email her at miss.penny.barber@gmail.com with the type of scene, what’s entailed, and rate of pay. She’s independent, so there are no booking fees.
ABOUT PENNY BARBER
Entrepreneur Penny Barber (AKA Penelope Barber) is a woman who wears many hats from producer/director to performer to storyteller/filmmaker to author and beyond. She’s known for playing the busty, glasses-wearing Taboo MILF who likes to sling verbal humiliation and Kinky Mommy Dom.