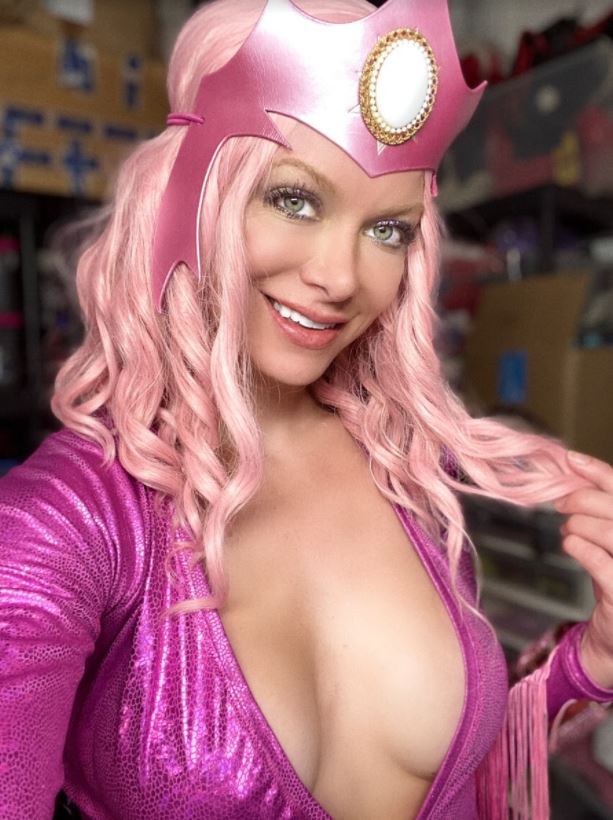 – As the sun sets on summer, Serene Siren is just heating up with some seriously sweltering new scenes dropping on fans’ screens in the coming weeks.

“Let me tell you, Miss Angela Sommers is absolutely stunning in person. Her costume – an all red jumpsuit with matching boots and a cape – fit her magnificently; her thighs, abs and perky tits filled it out exquisitely,” she said.

“I got to wear multiple costumes in this episode, as I come back as all the characters I’ve fought throughout this series – Kit Mercer, London River, Angela Sommers, Audrey Miles, Misty Stone and Capri Cavanni.

“I was in six custom-made costumes and one whole day was dedicated to green screen action… although I did get clit-blocked as those days are non-nude! Sometimes someone’s tits pop out during the wrestling or the cat fighting scenes, but otherwise, to my dismay, no sex is happening on these set days.”

Siren shot DT Wrestling scenes with Erika Jordan as well: “a couple of nude catfight wrestling customs that were very feisty and fiery sexy! If you don’t know of Erika Jordan yet, she’s definitely worth checking out! We look fit as fuck together and put our all into the matches.”

Girlfriends Films exclusive contract star Serene Siren is available for SOLO or NON-SEX bookings through 101Modeling.com and GIRL/GIRL or SOLO bookings for custom content via OnlyFans.com/serenesiren.