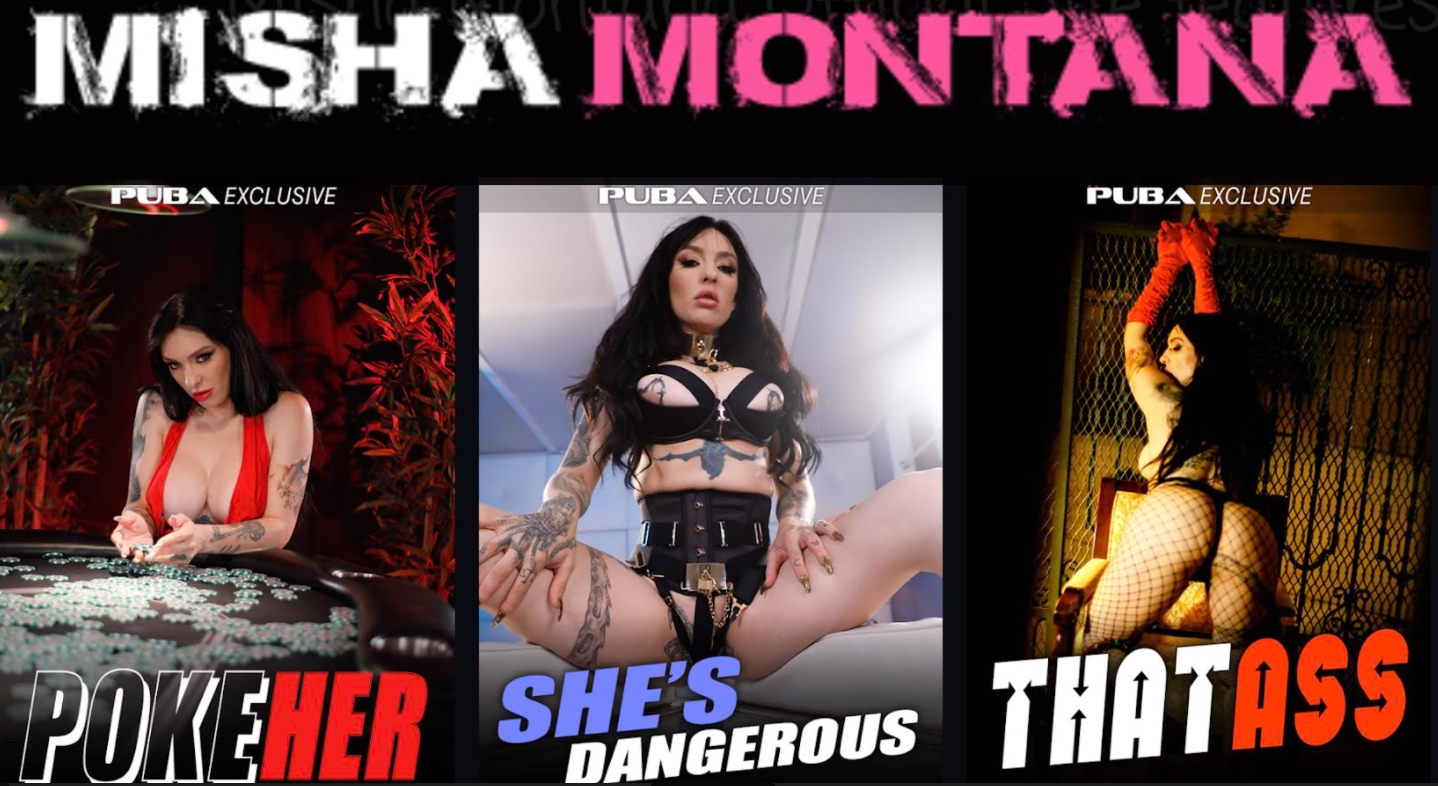 Almost a year in the making, Misha Montana has launched her highly-anticipated website through PUBA, which boasts over 70 sites. Her site mishamontana.com is the first addition to the network in years. Members will be treated to guaranteed weekly updates, including full-length B/G, G/G, threesomes, and solo scenes, photos sets, and BTS. And most of the content on the site will be exclusive. Misha’s site already has a ton of star-studded scenes with Nathan Bronson, Kitana Montana, Marica Hase, Samantha Mack, Jax Slayher, Zac Wild, Charlotte Stokely, Will Pounder, Madison Morgan, and Isiah Maxwell. Many more scenes are set to debut, including next week’s scene with mega-star Alex Jones.

“This site has been a long time in the making, and it’s exactly what I dreamed it would be. Ivan brought my vision to reality with my beautiful new site. It’s the perfect place for my fans to spend more time with my naughty friends and me. From the scenes to the photos to the BTS, it’s all premium content that my members will want to spend hours feasting on,” says Misha Montana.

Samantha Saint, who’s part of the PUBA Network, really enjoyed working with her. “I’m so excited to be back to work on my site with PUBA. It’s such a great platform to truly be you and create what you wish for your fans. The news of Misha joining the PUBA family is just the icing on the cake. I’m so excited for her and her fans to have a new place to call home! I look forward to working with her more often soon. She’s a beautiful person inside and out!”

Members of Misha’s site will also be able to access all the other PUBA girl sites. Right now, there are some stellar deals for joining. Go to mishamontana.com and smash the pink “Start Your Trial” button to score a whole year of Misha for only $65 and other membership levels. And anyone who joins will be entered to win a prize pack of Misha swag—look for the announcement in the coming weeks.

Affiliates looking to cash in on the PUBA Network of adult stars can use this link to join join.mishamontana.puba.com/track/MjU4OC4yMS4xMTUuMjQ2LjAuMC4wLjAuMA. Click “Webmasters” at the bottom of the page to pick your referral plan and learn more about marketing tools, payouts, support and more.

ABOUT MISHA MONTANA
Raven-haired, busty, Russian Alt Model and newly-minted AltErotic Director, as well as Chief Brand Officer and Production Manager Misha Montana (aka Xeno Kitty) is one of the most prolific women in the adult industry. From her Xenomorph face-hugger alien tattoo on her pussy that was documented in an AltErotic scene to making adult and mainstream headlines in 2021 for her stroke and being engaged to partner in crime, Ivan, on the streaming red carpet during the AltPorn Awards, Misha makes history consistently. As a fundraiser, she collaborated with skateboard company H-Street for a high-performance limited-edition deck, Marcelle Johnson Liberty, that featured her riding topless on the back of a motorcycle. 2021 also brought her first nomination for Movie of the Year from the Fleshbot Awards for her AltErotic showcase InkedXXXploitation of Misha Montana.

Misha’s fans can keep up with all her adventures by following her on Twitter and Instagram @themishamontana, Snapchat @misha_montana69, TikTok @mishamontana. Check her  Suicide Girls page suicidegirls.com/members/mishamontana online or get the app. Subscribe to her OnlyFans OnlyFans.com/mishamontana and AVN Stars stars.avn.com/mishamontana for exclusive content. Buy her vids à la carte on ManyVids manyvids.com/Profile/1003664616/Misha-Montana/Store/Videos. Talk dirty to her on SextPanther sextpanther.com/Misha-Montana. Her official ALT star-studded PUBA site mishamontana.com launched at the end of 2021. Find all her links in one place at allmylinks.com/mishamontana.