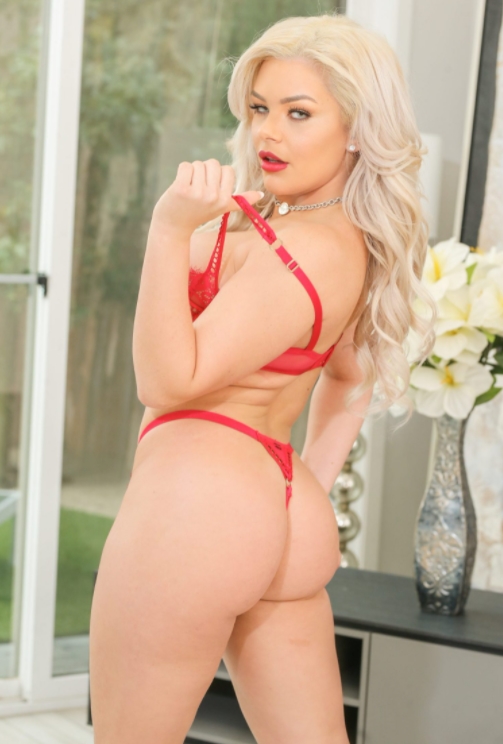 Chicago – Multi-award-nominated high-energy, exotic blonde spinner Kimber Woods took a few years off to focus on herself and creating her own content. Now, she’s back and better than ever and has re-signed with premier adult talent agency OC Modeling.

Known for her high-energy scenes in a range of genres, exotic look, and larger-than-life personality. Kimber Woods has always been a standout in the industry. She took a few years off, but now she’s back and better than ever, with a whole new look as a blonde with a banging body. Kimber has worked for all the top studios, including Tushy, Jules Jordan, Evil Angel, Twistys, HardX, Digital Playground, Wicked Pictures, Naughty America, Hustler, Team Skeet, Elegant Angel, and Girlfriends Films. She’s hoping to work for them again and the new imprints that have emerged. Kimber has also scored numerous nominations from XBIZ, AVN, and Spankbank Awards for her acting, scene work, and physique and also wants this trend to continue.

Kimber has returned to the agency that she built her career with, OC Modeling. She’s taken brand-new smoking hot photos for her agency page, which can be viewed at ocmodeling.com/model/kimber-woods, along with the types of scenes that she’s available for. Get her on your set by contacting Sandra at 818.298.6939 or Sandra@ocmodeling.com, Anthony at 818.428.0978 or Anthony@ocmodeling.com, or Eric at 818.854.5175 or eric@ocmodeling.com.

“I’m so excited to be back and in the best shape of my life. I’m ready to work with all the top studios again and the new ones that have been established while I was taking a break. I can’t wait to perform again, do a lot of firsts, and show off my new physique. I missed everyone so much, and I really feel like anything and everything is possible now,” says Kimber Woods.

“We’ve always loved working with Kimber and so happy she’s back with us. Even while she was gone, she was still a part of the OCM family. She looks incredible, and we’ve got a lot of plans for her and her career,” says Sandra McCarthy, Co-Owner of OC Modeling.

ABOUT OC MODELING
OC Modeling provides attractive male and female models of all types interested in working in adult films a chance to make excellent money and build careers in the industry. There are many talent agencies out there, but OCM is different—they have a strategic partnership with a top Internet company and an in-house PR company. Talent can make much more money, beyond just bookings for shoots. OCM’s goal is to develop a web presence for their select models and give them the ability to generate additional income through official personalized websites, live webcam shows, and much more.

They keep their models on top of their game and in the press with interviews, magazine placement, and much more. OC Modeling is an award-winning agency—their models have garnered countless AVN, XBIZ, and other influential award show wins throughout their 10+ years in business. With offices in Chatsworth and Las Vegas, OC Modeling is representation refined. For more information on OCM, go to ocmodeling.com and follow them on Twitter and Instagram at @ocmodeling.