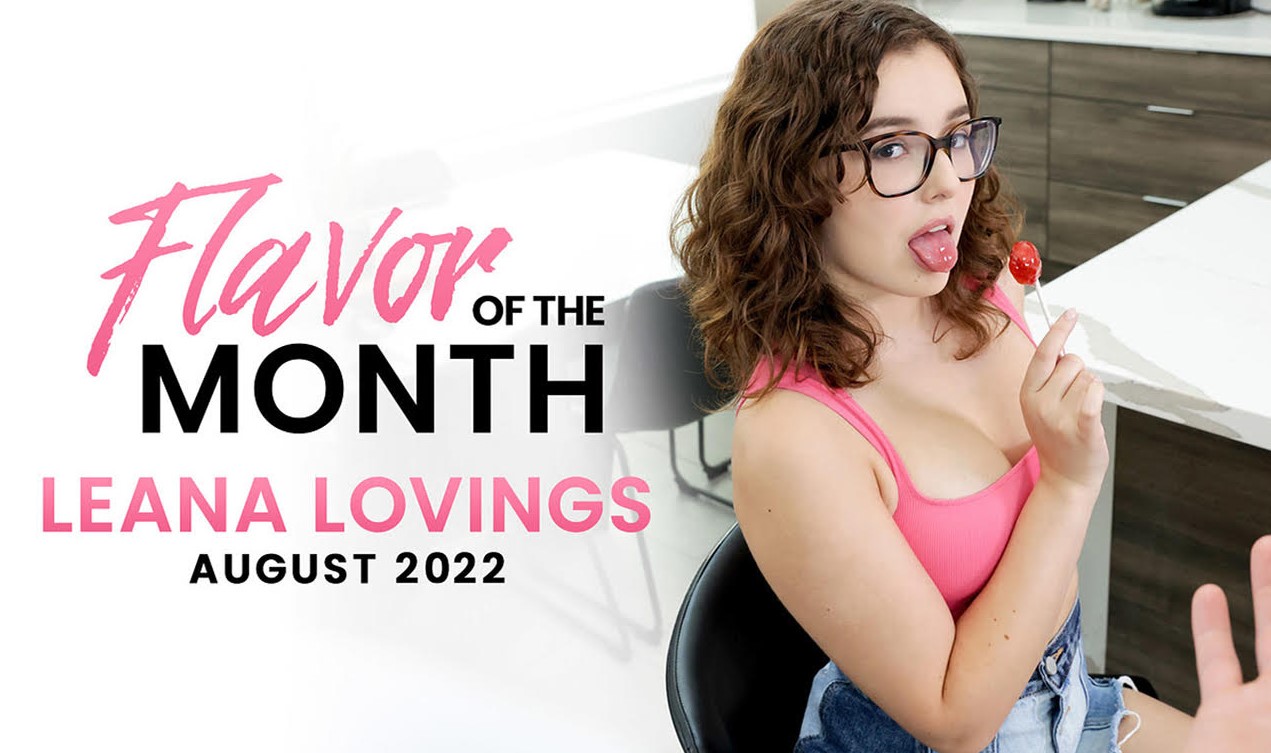 Chicago — Leana Lovings is celebrating the latest achievement in her whirlwind freshman year in adult films: the popular adult star and magazine cover model has been honored with the coveted title of “Flavor of the Month” for August by niche adult studio Nubiles Films.

Lovings’ girl-next-door looks, dynamic sexuality and irresistible personality have repeatedly sent her videos into the best seller charts, landed her on magazine covers for The Score Group’s iconic “18 Eighteen”, and Hustler’s “Barely Legal”, and led to a profile in British tabloid, the Daily Star.

In the racy new release, Leana has decided that it is National Disobedience Day, hence it’s time to act out. She is getting ready to go out with her friends when her stepbrother (Steele) comes to see if Leana is ready to go to her mom’s party. Leana announces that that’s not happening and takes off. Later, she’s sitting on the couch in a revealing bikini when Codey comes downstairs to ask if she’s heading to the pool. This time, though, Leana announces that it’s National Bikini Day, and that she’s going to the store.

Leana’s national days continue as she goes through National Lollipop Day. When Leana eventually settles on National Nudity Day, it gives Codey reason to celebrate! Leana doesn’t hesitate; she goes right for the goodies. Codey wants it, he really does, but he worries about what will happen if they get caught. Leana reassures him that they won’t, which is good enough for Codey.

Besides, she claims, while gripping a fistful of Codey’s stiffie, she missed National Snake Day!

“When Nubiles proposed that I do a couple of shoots for them, it was thrilling,” Lovings recalled. “I’m so grateful to be ‘Flavor of the Month’ for August, and being able to work with the Nubiles crew has been a blast!

“I loved every second working with them and there is nothing more valuable than the time spent with people who love what they film.”

Watch Lovings’ “Flavor of the Month” scene on StepSiblingsCaught.com or Nubiles’ flagship site at here ( https://nubilesporn.com/video/watch/152007/august-2022-flavor-of-the-month-leana-lovings ).

To commemorate her “Flavor of the Month” title, Lovings was presented with a special gift box from Nubiles, and she was so touched by the gesture that she recorded an unboxing video, and posted it to her Twitter ( https://twitter.com/leanalovings/status/1554985422979227648?s=21 ).

Find a directory of all of Leana’s steamy Nubiles scenes at https://nubilesporn.com/model/profile/15999/leana-lovings.

One of the fastest-rising stars in adult entertainment, Leana Lovings was already an immensely popular webcam performer with over 200,000 followers on Chaturbate before taking the plunge into the World of X in September 2021.

Lovings grew up in the rural southeast, and attended university with double major in Biology and Psychology and a specialization in Neuroscience. Camming represented “a way to explore my sexuality in a safe way, while creating something that feels like a very intimate and even comforting experience for the viewer,” Lovings said.

Having been raised in a religious environment, Lovings said that “sex work healed me in a lot of ways. It taught me how to care more for myself — exercise, self care — and how to have more confidence in myself.”

In March 2022, Lovings graced the cover of The Score Group’s iconic “18 Eighteen” magazine, and she was the cover girl for the May issue of Hustler’s “Barely Legal” magazine.

In May, Lovings served as trophy girl at the adult industry’s X-Rated Critics Organization (XRCO) Awards in Hollywood, and was a featured speaker on two panels at the YNOT Summit.

She resides in South Florida.

Blake Blossom Opens Up in Revealing ‘And Now We Drink’ Appearance