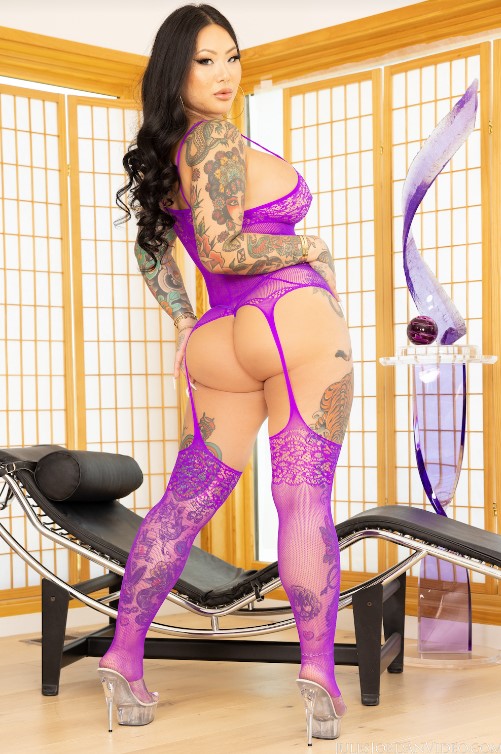 Jules Jordan convinced Connie to film her very first scene this spring, and fans and members of Jules Jordan are still talking about “Illustrated Woman.” And now “Size Queen Connie Perignon Requested Massive Meat Man Dredd to Fulfill Her Big Cock Obsession” is available as a member exclusive and is set to break records. She comes out in a purple mesh bodysuit, g-string and garters, and clear stripper heels. Connie’s ready to take on Dredd, who has the biggest cock she’s ever seen and could be the next BBC queen. Dredd takes her in every position possible, and Connie has countless orgasms with her eyes rolling to the back of her head. She begs for more, and Dredd delivers. Watch the trailer and scene at julesjordan.com/trial/scenes/Connie-Perignon-Busty-Asian-Interracial_vids.html. And while you’re there, scroll down to the bottom of the page to watch her debut.

Connie also gave Hustler’s John Blaylock an exclusive interview and served as a guide to her hometown in “Connie Perignon’s Guide to Taiwan.” Born in Taipei, Connie talks about her favorite things to do there, favorite street foods, the general attitude towards sex, basic customs and conduct, getting around Taipei, and why Taiwan is special. The piece is also filled with exquisite photos of her. Get a sneak peek or read the feature in its entirety at hustlermagazine.com/articles/connie-perignons-guide-to-taiwan.

“I was so glad to be back on set with Jules Jordan and could hardly contain myself when I saw Dredd’s dick. Holy shit! I enjoyed every second of it and can’t wait to come back for more,” says Connie Perignon. “And if you’ve ever wanted to take a trip to Taiwan, let me be your guide in my new Hustler feature. There’s nothing like learning about faraway, exotic places from a local. I’ve definitely got you covered.”

Get Connie on your top-shelf studio’s set by emailing her at meetperignon@protonmail.com.