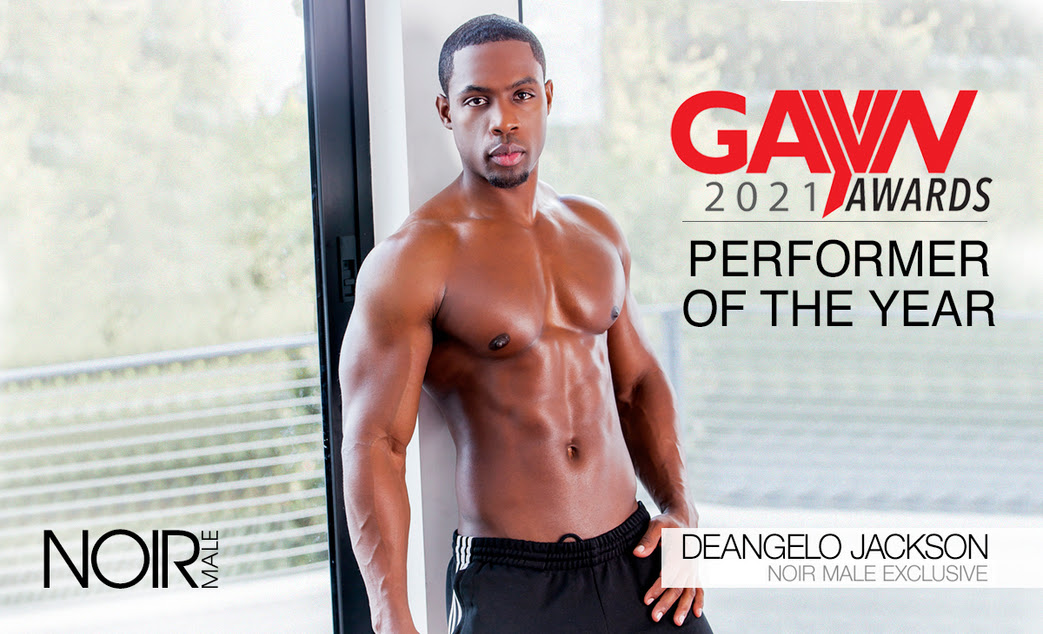 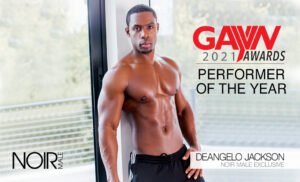 Chicago – After making history last year (2020) as the first Black gay porn performer to win the GAYVN Award for Best Actor, Noir Male’s exclusive talent DeAngelo Jackson returned this year to virtually pick up the 2021 Performer of the Year Award. For the first time ever the GAYVN Awards were only virtually livestreamed. Host Alec Mapa and Sherry Vine awarded winners in 29 categories.
“Just trying to let this win sink in,” says DeAngelo Jackson. “I cannot believe that I was able to still get recognition after all that has (not) happened in 2020.”
The adult entertainment industry, and the careers of many performers were affected by the 2020 global pandemic.  DeAngelo Jackson included, didn’t let it slow him down, Jackson launched his own 2020 calendar, starred in Noir Male’s first feature film Sin City, featured in two of Men.com’s Tom of Finland series, modeled for the cover of “Office Magazine” Spring/Summer issue, starred in the global pandemic documentary “Porn Pandemic: The Guys,” and recently wrapped production on his Noir Male star showcase, plus much more.
“DeAngelo is a force of nature and is so deserving of this honor,” says Jon Blitt, VP of Mile High Media, parent company for Noir Male. “We are so excited for him. He is a true professional and always working to be his absolute best as an actor and performer. We are so fortunate to have him represent our brand.”
About Off the Clock Productions
Off the Clock Productions is an award-winning multimedia production and management company focused on producing film, tv, web, theatre content and talent management. Recent work includes the debut of the pioneering hit comedy web series/DVD series CHRISTOPHER STREET TV. Off the Clock Productions represents a vast variety of talent from reality tv, adult film stars, and more.
About Noir Male
Noir Male celebrates the full range of sexuality and fantasy fulfillment, in a product that breaks free from the stereotypes and conventions of typical gay porn. No body part is off-limits, and no desires out of reach, in scorching hot encounters, where sexual preconceptions are left behind. Noir Male blends classic elegance with modern style, showcasing men of color, as sensual, sexual and unapologetically fine.
For the latest information, exclusives and BTS previews follow Noir Male on twitter: www.Twitter.com/NoirMaleXXX and Instagram @OfficialNoirMale