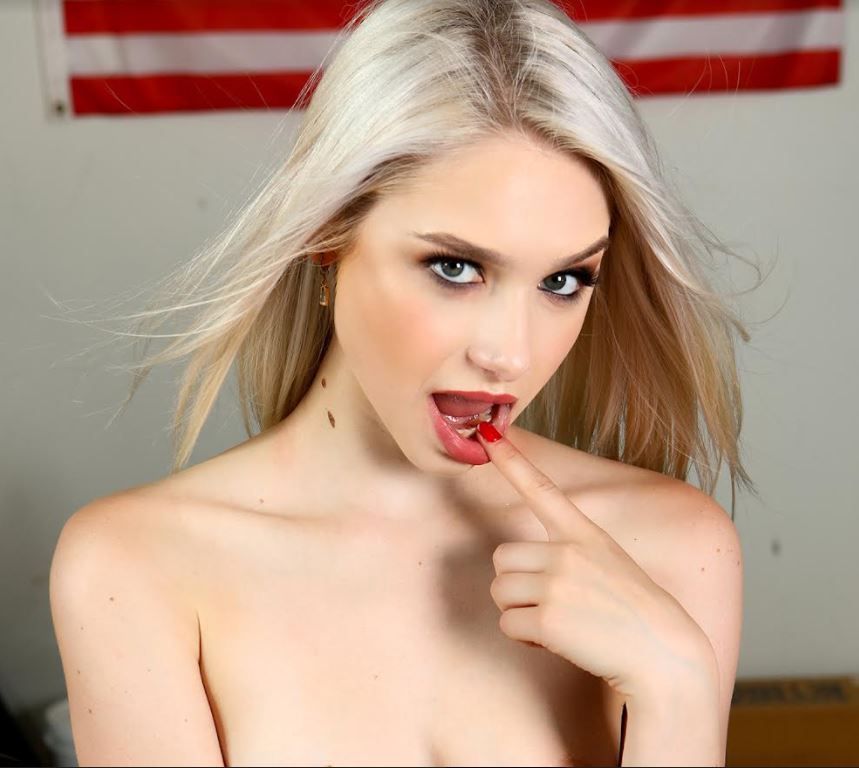 Chicago – SexLikeReal.com is excited to announce that “Craving Angel,” a new virtual reality fantasy featuring Scarlett Hampton in her VR debut, is now streaming on the platform. The exclusive scene was produced by award-winning director Alex Nash and director of photography Evan Redstar for SexLikeReal Originals.

The featurette stars Hampton as a wily temptress that conveniently shows up in the VR viewer’s garage on a lazy summer afternoon. Feigning interest in the viewer’s motorcycle, it rapidly becomes clear that the platinum blonde babe is interested in taking a wild ride of a different sort. Unable to resist the fit and fetching knockout’s inescapable charms, the viewer gives in to Hampton’s seductive kisses as the two lovers engage in an illicit sexual affair that starts in the garage and, after nearly an hour of hardcore filthiness, ends climactically with a silky-sweet cream pie in the bedroom.

“Scarlett is the leather-clad femme fatale of your dreams in this salacious screw-fest,” said director Nash. “’Craving Angel’ is Scarlett’s inaugural VR scene, but she delivers the intimate and enticing POV performance of a seasoned pro. Beautiful, young, and wondrously alluring, Scarlett transports spectators into her lush and vibrant 3D world and offers up a portrayal replete with a plethora of perverted positions that’ll have her fans writhing with sensual delight.”

“I’m excited to be here,” said Hampton in an on-the-set interview. “Yes, this will be my first VR scene. I hope that it could bring you joy in some way or help you feel something.”

“Craving Angel” is shot in high-resolution 6K with a 200-degree field of vision and spatial audio. The scene can be viewed on SexLikeReal.com here: https://www.sexlikereal.com/scenes/craving-angel-22082

A behind-the-scenes interview with Hampton can be viewed here: https://www.sexlikereal.com/scenes/scarlett-hampton-interview–22141

Founded in 2015, SexLikeReal.com is the top destination for interactive virtual reality adult entertainment. With cutting-edge technology and the world’s largest selection of VR content, SexLikeReal is leading the way into the future of virtual intimacy. The platform offers immersive virtual experiences with up to 8K video quality for a variety of VR gear including Oculus Quest 2, Valve Index, and Nvidia VR headsets. SexLikeReal is also compatible with leading sex toy technology like Fleshlight Launch, Onyx+ and Handy. Additionally, SexLikeReal provides one-on-one companionship with a diverse selection of live VR cam performers with its new interactive VR cam feature.