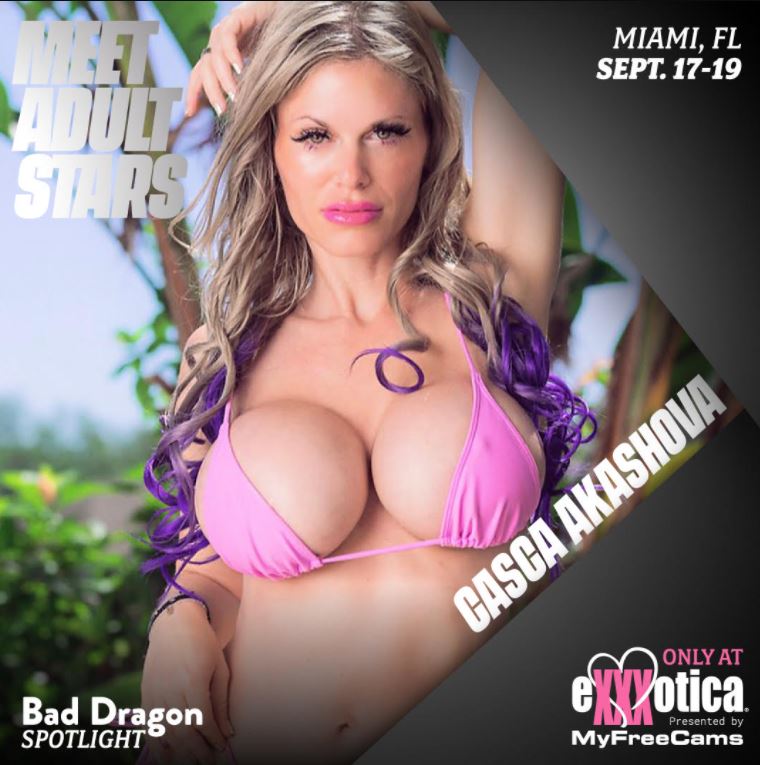 Chicago— Adult star and glamour model Casca Akashova is thrilled to announce that she will make her adult fan convention debut at the Miami EXXXOTICA Expo this weekend, September 17 to 19.

The popular star will be signing signing autographs and posing for selfies with fans at the star-studded Bad Dragon Spotlight Booth throughout the three-day event, whose show hours are: Friday from 6 pm to 11 pm, Saturday from 2 pm to 10 pm, and Sunday from 1 pm to 6 pm.

EXXXOTICA Expo is the largest adult event in the country, and with most pandemic rules now lifted across the land, the long wait is finally over!

“I’m ready to pop my . . . Ha! . . . well it’s my first time at EXXXOTICA and I am so pleased to be spotlighted by Bad Dragon,” said Akashova. “I am grateful to everyone at EXXXOTICA, and thank you to my wonderful publicist, HoneyHouse PR. I can’t wait to see my fans.”

The EXXXOTICA Expo is being held at the Miami Airport Convention Center, located at 711 NW 72nd Ave in Miami, FL. All of Akashova’s fans looking for tickets and additional event information can find it on the show’s official website: https://exxxoticaexpo.com

Bad Dragon Spotlight is the EXXXOTICA Expo’s largest feature, showcasing more than a dozen top adult stars. Bad Dragon was born out of a strong desire for a wide selection of fantasy toys to be made available to everyone. The company’s main mission is to do its part in ‘making fantasies real’ for individuals who want to indulge in their fantasies a little deeper.

In other news, Akashova has been busy honing her skills as an interviewer on the Last Call Podcast, interviewing boxers, MMA fighters, sports reporters, and providing coverage of MMA and boxing events.

The show, which has been on the air in some fashion for over 13 years, features this week Casca’s interview with Bellator lightweight Georgi Karakhanyan, in which he discusses Bellator 266 and free agency. Listen here ( https://last-call.simplecast.com/episodes/devonte-smith-and-georgi-karakhanyan ).

Akashova exploded onto the adult film scene in 2019, launching an impressive career that has earned her a throng of fans, multiple award nominations, as well as the coveted Best New Starlet prize in the 2020 Fleshbot Awards