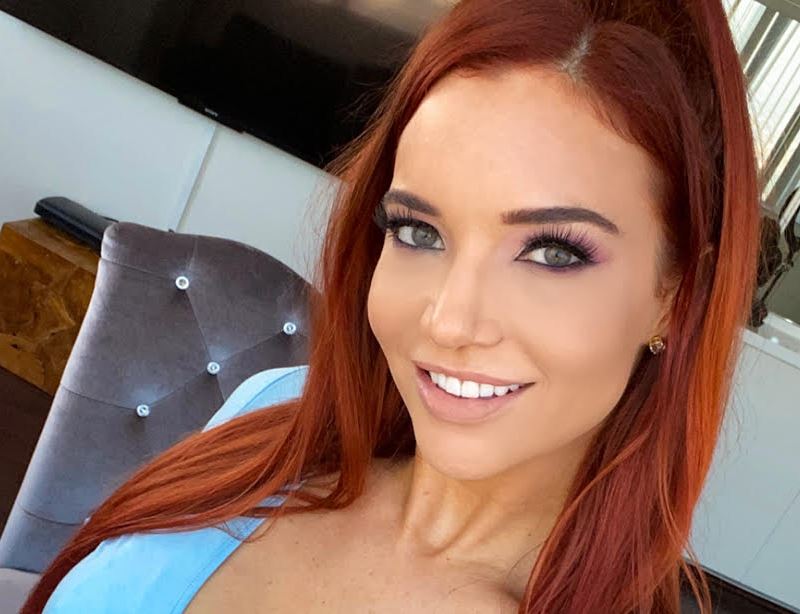 Kate Kennedy said, “I’ve been co-hosting ‘Two Girls One Mic’ with Alice Vaughn for the past several months, and it’s always a treat to get to interview my old industry pals — and having Jayden as a guest is extra sweet! She’s so fun, charming, and a driven business woman. She’s always an excellent interview and makes for a must listen episode!”

Cole commented, “I’m so pumped to have done an episode of “Two Girls One Mic! “ It’s such a fun, original concept to hear women break down different adult films in a sex-positive, comedic fashion while inviting guests from inside the industry and ‘civilians’ alike to give their input and get to know the lovely ladies who host. I get really anxious doing podcasts, so it was great to have an intelligent, supportive woman like Alice and my fellow performer Kate to make me feel right at home.

Read Cole’s September 2021 AVN Magazine cover story here.
Keep up with Jayden Cole’s exploits on Twitter: @jaydencole, Instagram: @GratefulRedTour and OnlyFans.
Follow Two Girls One Mic: The Porncast on www.twogirlsonemic.com and on Twitter: @TGOMPodcast, on Instagram: @tgompodcast and on Facebook: Facebook.com/TGOMPodcast.
About Jayden Cole
A flame-haired five-foot-ten-inch beauty of Irish/Lebanese descent, adult film superstar, feature entertainer and Penthouse Pet Jayden Cole commenced her career in adult entertainment by appearing in the “Girls of the OC” pictorial in the August 2006 issue of Playboy. She began performing in girl/girl hardcore films in July 2009, and went on to be honored as Twistys Treat of the Month for October 2009, Danni.com’s April 2010 Danni Girl, and Juliland.com’s JGrrl of the Month for January 2011. And in May 2019, she graced the cover of Strip LV Magazine.
A dancer since her teens, then long-legged Cole launched her feature dancing career in 2009 when she became a Penthouse Pet. In 2011, she won Exotic Dancer Magazine’s ‘Best Newcomer Feature Entertainer’; in 2012 she was named ‘Miss ExoticDancer.com’; and in 2016 she won ‘Club Favorite Feature’.
In April 2020, she discussed the ways in which online sex workers are innovating in the crowded, post-COVID-19 online pornosphere in a HUSTLERMagazine.com feature and in May she was interviewed by The Daily Beast about “The Fake Porn Stars Scamming Lonely Guys Out of Big Money During the Pandemic”.
Cole’s 2020 adult movie releases include “Lesbian Performers Of The Year 2020” (Elegant Angel), “Stuck With Her Pussy Out” (Brazzers), “Juicy Licks Vol. 9” (Reality Kings), and “Alexis Texas Lesbian House Party!” (Elegant Angel).
She was recently nominated for “Girl/Girl Performer of the Year” by the X-Rated Critics Organization (XRCO) for its 36th Annual Awards, and earned her seventh consecutive nomination for ‘All-Girl Performer of the Year’ at the 2021 AVN Awards.
Cole is based in Las Vegas.
About Kate Kennedy
Los Angeles-based comedian, content creator, porn pundit, and self-described “podcast slut” Kate Kennedy entered the adult industry behind the scenes, working in marketing and production for a year before stepping in front of the camera in July 2018. With girl-next-door good looks, acting chops and a personality to charm the pants right off you, she quickly became an industry favorite, racking up credits for major adult studios, as well as multiple award nominations, including a 2019 ‘Best New Starlet’ nod from NightMoves.
Kennedy fulfilled a lifelong dream and began performing standup comedy in 2019 at major Los Angeles venues, including the world famous Comedy Store. Her blend of sex and humor has made her a hit with comedy and porn fans alike, and she can frequently be heard dishing the dirty details of her porn career on podcasts and radio, including Your Mom’s House with Tom Segura & Christina P., and Dr. Drew After Dark.
In June 2020, she was featured in a HUSTLER Magazine story on adult stars who also perform in the comedy world, and the following month, Kennedy launched her own perverse podcast, “The Kennedy Assassination,” in which she interviews men from the internet who really despise her.
Kennedy went on to host the “Cam Girl Chronicles” podcast, which dives into the world of webcam and features ladies from ImLive sharing their stories, and is currently the co-host of “Two Girls One Mic: The Porncast,” in which she and show creator Alice Vaughn discuss the holes and the plot holes of your favorite porn.
Kennedy and her OnlyFans were the focus of a March 2020 New York Post story examining the silver lining some sex workers and their fans have found as people in self-isolation seek to escape the new reality of the coronavirus. In April, Kennedy discussed the ways in which online sex workers are innovating and adapting in the crowded, post-COVID-19 online pornosphere in a HUSTLERMagazine.com feature, and in June she spoke with Men’s Health about how OnlyFans has changed the face of the adult business.
In September, Kennedy shared her perspective on whether celebrities are ruining OnlyFans for sex workers — “The Bella Thorne Effect” — with Playboy, and penned “Porn Stars, COVID and Side Hustles” for HUSTLER.
Also in 2020, Kennedy was honored by the 10th Annual Spank Bank Awards in three categories: ‘Most Likely To Become The Cirque de Soleil’s Performance Masturbator’; ‘Puppeteer of the Year (Best Hands/Fister)’; and ‘Fucking Nerd of the Year.’
Kennedy will host the 2021 YNOT Cam Awards live on-stage at Avalon Hollywood on October 14, 2021.
Keep up with Kate Kennedy on Twitter: @TheOGKennedy as well as on OnlyFans and her website SemiProCockJockey.com.