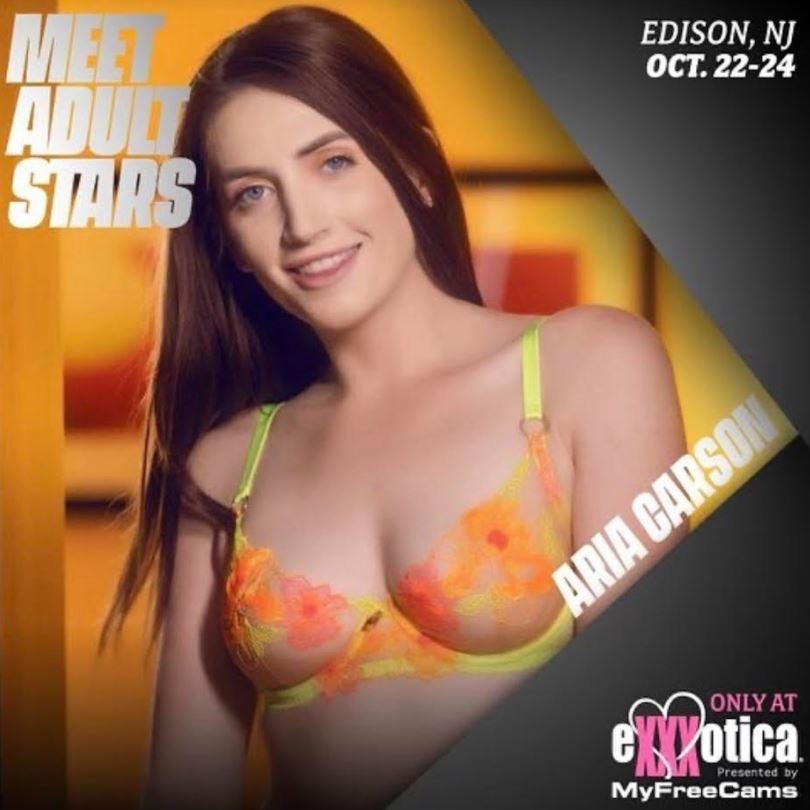 Chicago – All-natural, dark-haired teen Aria Carson is jetting to the East Coast to appear at her very first EXXXOTICA. This weekend, she’ll be appearing at New Jersey expo and her fans better be ready to meet her.

EXXXOTICA New Jersey is this Friday, October 22nd through Sunday, October 24th—it’s one of the biggest tradeshows of the year and there will be tons of adult stars appearing, including Aria Carson. Fans can meet the rising starlet, take a selfie with her, purchase 8x10s, and/or pick up some of her titles from Raw Attack and Jane Doe Pictures on DVD. Aria is appearing at her own booth and will be there for most of the hours the floor is open. Look for her giant pop-up banner to find her.

“I’m so excited to be doing an EXXXOTICA finally. My fans have been asking when I would be appearing at one, and I picked the New Jersey show since it’s the biggest and possibly the best one. If you’re in the area, definitely stop by one, two, or all three days of the show—I can’t wait to meet you!” says Aria Carson.
EXXXOTICA New Jersey is taking place at the New Jersey Convention & Exposition Center located at 97 Sunfield Ave. in Edison, NJ. Show hours are Friday 5pm to 11pm, Saturday 1pm to 10pm and Sunday 1pm to 6pm. For tickets and info on the expo, after parties, seminars, stage shows, and more, visit exxxoticaexpo.com/location/edison-nj.
Aria Carson is exclusive with Foxxx Modeling. Get her on your set by contacting Chris Cane via phone 818.884.0847 or email booking@foxxxmodeling.com. View her agency photos at foxxxmodeling.com/MCE/foxxxmodeling/0/bio/[1-30]/3445/01/NF.
ABOUT ARIA CARSON
With almost two years in adult, all-natural, dark-haired teen and Queen of Selfies, Aria Carson has a lot to celebrate. In 2019, she entered adult to escape the 9 to 5 grind and leave full-time stripping behind. A director and performer favorite, Aria brings high energy to each set she’s on and always delivers mind-blowing BJs. She’s starred in scenes for Cherry Pimps, Team Skeet, Evil Angel, ATKingdom, Foster Tapes, Slut Inspection, Interracial Pass, Lethal Hardcore, Spizoo, Hustler, All Anal, Score, Karups, and many more.

Look for Aria to be more in the limelight in 2021, scoring starring roles for top-shelf studios, awards nominations, interviews, and more. Keep up with everything in her world by following her on Twitter @theariacarson and Instagram @ariaxcarson. Get the best exclusive content and DM Aria by subscribing to her AVN Stars ariacarson.com and PocketStars pocketstars.com/theariacarson. Join her Premium Snap fancentro.com/ariacarson to follow her life on and off set. Indulge in her fetish content on FetFans app.fetfans.me/ariacarson. Talk dirty to her on SexPanther sextpanther.com/Aria-Carson. Buy her clips on Many Vids manyvids.com/Profile/1002710954/AriaCarson and Modelhub modelhub.com/aria-carson. Subscribe and like her content on Pornhub pornhub.com/pornstar/aria-carson.