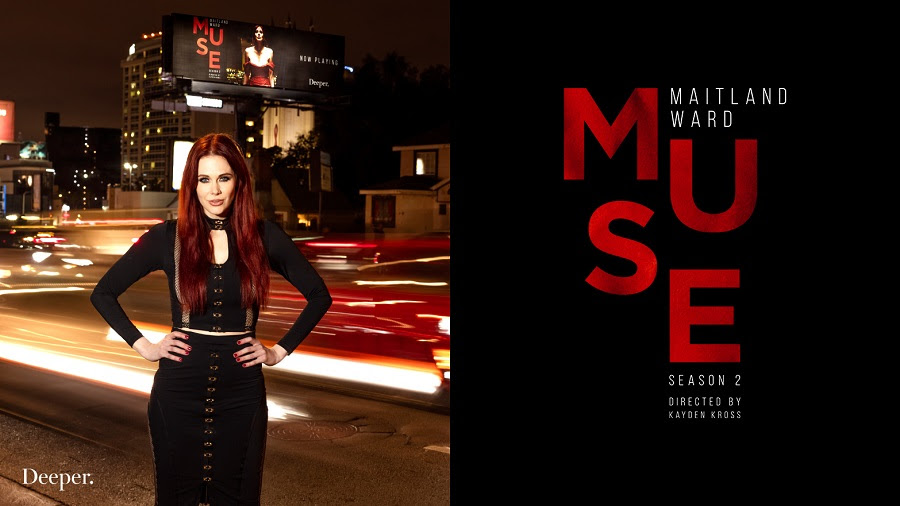 The high profile, big budget film, which took 12 days to shoot with a 75-page script filled with 750 lines of dialogue for Ward to memorize, picked up nine nominations in total – including Grand Reel (Best Picture).

“I am overjoyed and with the critical and fan response to my work in Muse, Muse 2 and Mistress Maitland 2, and am so honored to be chosen to represent the Deeper brand with these amazing AVN Award nominations,” said Ward, who will be watching the show virtually on Saturday, January 22 via stars.avn.com.

“When I began this journey nearly three years ago, I didn’t really know where the road was going to take me, but if you love what you do, the work speaks for itself and success will soon follow. Thank you AVN, Kayden Kross, the crew at Deeper and Vixen Media Group, and of course my fans for their ongoing support; I am blessed beyond words.”

For more information on Maitland Ward, find and follow her at:

Southern California-born and bred Maitland Ward has quickly become one of the biggest stars in adult entertainment, after an-already successful career as an American model, actress and cosplay personality. The star, who joined the cast of Bold and the Beautiful as a teen and found fame as Rachel McGuire on the beloved ABC sitcom Boy Meets World, jumped headfirst into shooting adult films in 2019 without much persuasion.

The statuesque (5’10”) all-natural redhead is unique in that not only is she beautiful and built for the adult biz, Ward’s talent as an actress means she can also carry dramatic and comedic scenes with ease. Her playful energy, professionalism and open sexuality earned her an exclusive performance contract with worldwide brand Vixen Media Group; in 2020, Ward won three AVN Awards for Best Supporting Actress and Best Three-Way Sex Scene-G/G/B for her work in Deeper mega-hit feature Drive, as well as Favorite Camming Cosplayer.