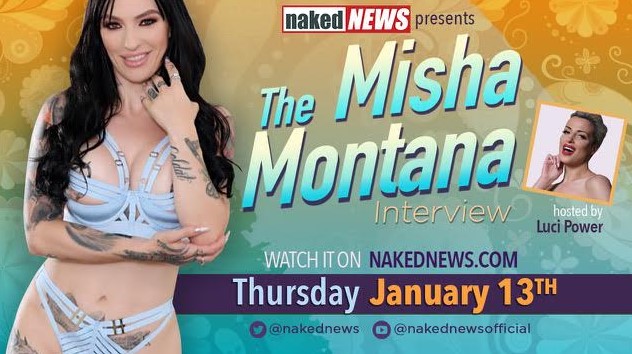 Chicago – Raven-haired, busty, Russian Alt Model Misha Montana is looking forward to everything 2022 will bring. At the end of 2021, she sat down with Naked News for an exclusive interview recapping her incredible year, and it’s available today to watch.

Misha Montana’s exclusive Naked News interview is airing today. Misha and host Laura Desirée talk about Misha’s stroke and comeback, the many hats she wears at AltErotic, her exquisite and highly personal showcase film, her infamous alien tattoo on her snatch, and much more. As the interview plays, viewers are treated to b-roll photos and videos of Misha from her films, social media, and more. And as an added bonus, Laura and Misha are both naked during the interview, living up to the network’s name.

“I’ve always been a huge fan of Naked News and their stunning anchors! I always hoped that I would be on the show, and now it’s a reality! Laura was just incredible, and this is one of my favorite interviews. My fans should definitely check it out,” says Misha Montana.

Marica’s interview is available exclusively for Naked News members—it will air today and be available 24/7 at nakednews.com. Look for it on the front page of the iconic site. If you’re not already a subscriber, join now at nakednews.com/account/purchase.

ABOUT MISHA MONTANA
Raven-haired, busty, Russian Alt Model and newly-minted AltErotic Director, as well as Chief Brand Officer and Production Manager Misha Montana (aka Xeno Kitty) is one of the most prolific women in the adult industry. From her Xenomorph face-hugger alien tattoo on her pussy that was documented in an AltErotic scene to making adult and mainstream headlines in 2021 for her stroke and being engaged to partner in crime, Ivan, on the streaming red carpet during the AltPorn Awards, Misha makes history consistently. As a fundraiser, she collaborated with skateboard company H-Street for a high-performance limited-edition deck, Marcelle Johnson Liberty, that featured her riding topless on the back of a motorcycle.

2021 also brought her first nomination for Movie of the Year from the Fleshbot Awards for her AltErotic showcase InkedXXXploitation of Misha Montana. XBIZ also nommed the film for Performer Showcase of the Year and Best Sex Scene — Performer Showcase and AVN gave it noms for Best Star Showcase and Best Blowbang Scene. XBIZ also nominated Misha for Best Sex Scene — Gonzo for the first film she’s directed, GlamGonz also from AltErotic. And Misha’s acting skills were also recognized by AVN with a nod for Best Supporting Actress for her role Slutana Kommunistrakova in AltErotic’s Ink Motel 3.

Misha’s fans can keep up with all her adventures by following her on Twitter and Instagram @themishamontana, Snapchat @misha_montana69, TikTok @mishamontana. Check her  Suicide Girls page suicidegirls.com/members/mishamontana online or get the app. Subscribe to her OnlyFans OnlyFans.com/mishamontana and AVN Stars stars.avn.com/mishamontana for exclusive content. Buy her vids à la carte on ManyVids manyvids.com/Profile/1003664616/Misha-Montana/Store/Videos. Talk dirty to her on SextPanther sextpanther.com/Misha-Montana. Her official ALT star-studded PUBA site mishamontana.com launched at the end of 2021. Find all her links in one place at allmylinks.com/mishamontana.