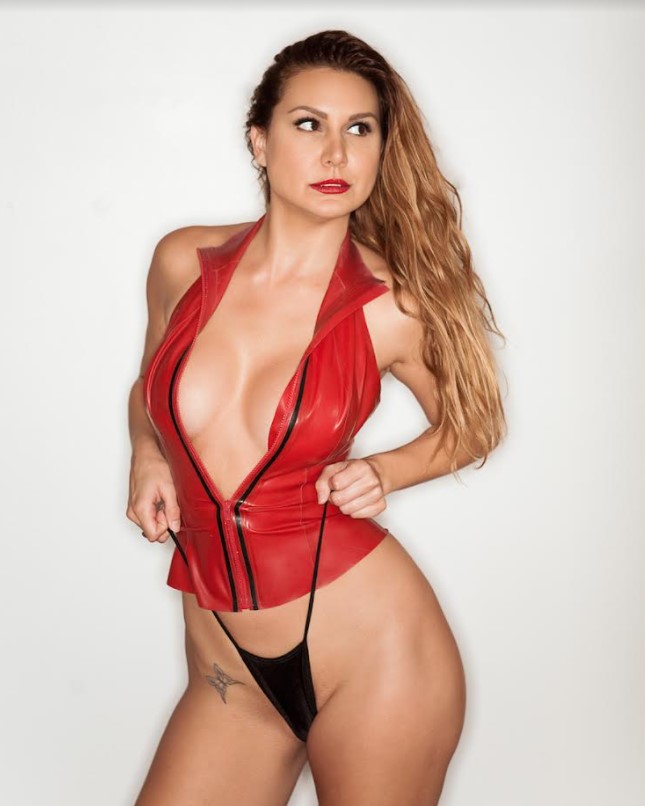 Chicago – Bubbly bronzed-haired Canadian bombshell Marina Valmont is all about the sexy lifestyle and loves to be in front of the camera. In 2012, she joined iconic Canadian news and entertainment program, Naked News as an anchor. Late last year, Naked News launched Naked News Live, with Marina as the producer and a recruiter for new talent.

Last fall, Naked News Live (NNL) launched. The live stream is non-explicit, personality-based, fun, and allows guests to interact and chat with their fans. As one of the most popular anchors and segment producers, Marina Valmont is expanding her role with Naked News and has taken on the responsibility of producer and talent recruiter. After contacting with Marina and interviewing with her, some of the hottest and most entertaining women in the world get their shot at being a guest. Guest anchors create a Tempted page and use the virtual party show feature to join/connect to the NNL stream. In addition to the glory of being a guest, talent receives an appearance fee, tips from fans, and traffic to their Tempted page and can increase their revenue when fans subscribe and purchase content from their clip store, etc.

“I remember my audition and getting my start at Naked News—it was an exciting time! There are so many sexy, fascinating, and entertaining women looking to work with Naked News, and I’m so excited to facilitate this and potentially give them their big break. If they do well as a guest on NNL, they can definitely come back, host again, and possibly get something more permanent with Naked News. This is the perfect chance for our viewers to discover them and to start working with the program without leaving their homes. There’s a strong possibility that they could become the next Naked News international correspondent,” says Marina Valmont.

ABOUT MARINA VALMONT
Bubbly bronzed-haired Canadian bombshell of Russian and French heritage Marina Valmont is all about the sexy lifestyle and loves to be in front of the camera—she’s a producer of Naked News Live and one of their most popular anchors, as a well as a Tempted’s Creative producer and ambassador, a Twitch streamer (with over 750k views) and TikTok viral sensation (her top TikTok has over 880k views), social media personality, influencer, and naturist. Marina got her start with iconic Canadian news and entertainment website, Naked News, in 2012 after a successful audition. As an anchor, she’s known for exuding sexuality and her quirky sense of humor, and she’s traveled the globe filming topless/nude, hosting events, and interviewing fascinating people in NYC, Vegas, Miami, Mexico, Jamaica, and Amsterdam. 2018 brought further world fame as she graced the pages of Playboy Czech and scored the title Miss April.

Before becoming a famed presenter, she modeled and danced in NYC, Vegas, and San Francisco, was a promo model and Budweiser Girl, posed for calendars and at car shows, was body painted multiple times at the Playboy Mansion, and competed in pageants. More than just a pretty face, Marina has a brown belt in Tae Kwon Do and is a huge proponent of mental health. She’s a Batman fan, her favorite characters to cosplay are Batgirl and Harley Quinn, and she enjoys attending Comic-Cons.

Keep up with her sexy globetrotting adventures by following her on Twitter, Instagram, Snapchat, and Twitch at @MarinaValmont and TikTok at @iammarinavalmont. Subscribe to her life vlog aka YouTube Channel youtube.com/c/MarinaValmont. Look for the launch of her official site marinavalmont.com later in 2022. Watch her exclusive videos and high-energy weekly live shows and see her uncensored photos by becoming a member of her Tempted fan page tempted.com/profile/MarinaValmont. And find all her links in one place at instabio.cc/21125jH99RV.