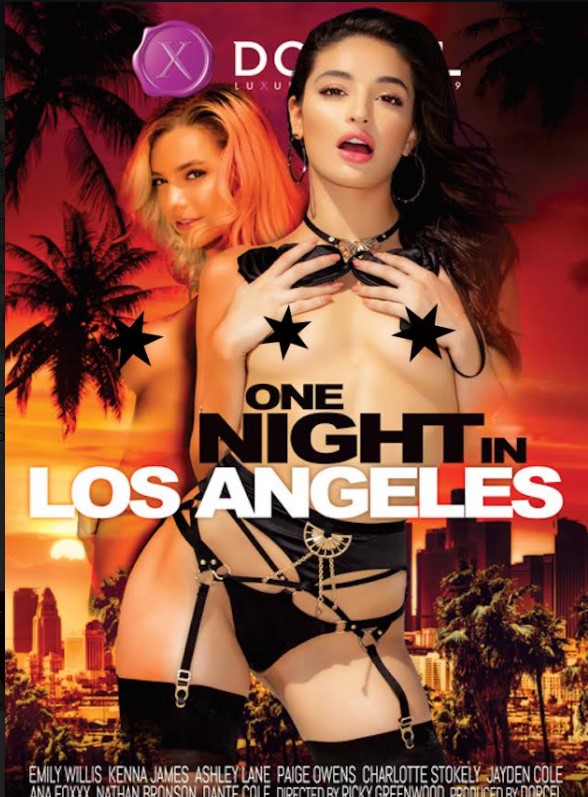 Chicago – On Sunday night, award-winning French Canadian adult director and writer Ricky Greenwood latest directing opus, One Night in Los Angeles, is set to debut on the Dorcel Vision site tomorrow and is already at the top of the charts of HotMovies and Adult Empire.

Directed by Ricky Greenwood, Marc Dorcel’s One Night in Los Angeles is the story of two students from Oklahoma, Emily Willis and Kenna James, who come to Hollywood to meet young actor Dante Colle. Dante’s personal assistant Patrick (played by Nathan Bronson) picks them up, drives them through the city, and brings them to the luxurious villa. Dante would rather be poolside with Paige Owens and Ashley Lane, so Patrick gets to entertain them. Emily and Kenna return to the villa for the night’s festivities, including a three-way with Jayden Cole, Charlotte Stokely, and Ana Foxxx. Dante shows them around the house and convinces them to have a three-way with him. It’s then Kenna realizes he’s not the Prince Charming he makes himself out to be, but Emily is totally captivated. Patrick seduces Kenna in one of Dante’s lofts—she is taken by his humbleness. Emily decides she will do whatever it takes to get noticed, including seducing men like Dante’s friends Will Pounder and Codey Steele. Emily also realizes the man she thought she was in love with isn’t what she expected, and she’s just another conquest. Then, Emily and Kenna decide to take the future into their own hands. But will they succeed without the help of questionable characters?

“Dante, Ricky, Emily, and Kenna really shine in the film—their acting and performances are incredible. I enjoyed filming this movie because I was able to pull out all the stops and really go for it with a bigger than usual budget and show the beauty of Los Angeles. It’s a story of how you can get lost in Tinsel Town, but you can always find your way out and up,” says Ricky Greenwood.

One Night in Los Angeles has a 166 minute running time and is topping the charts at Adult Empire adultempire.com/3253056/one-night-in-los-angeles-porn-videos.html and HotMovies hotmovies.com/video/452043/One-Night-In-Los-Angeles. Tomorrow, it will be available for Dorcel Vision members at dorcelvision.com/en/movies/marc-dorcel/one-night-in-los-angeles. Currently, members and site visitors can watch the trailer, get a synopsis, and more on the Dorcel site.

The multi-award-winning director and writer is known for his story-driven feature films, like Confessions of a Sinful Nun 2: The Rise of Sister Mona, Terror Camp, Talk Derby to Me, and Killer on the Loose. Over the past two years, he’s becoming known as a multi-faceted director that works in the straight, gay, trans, and lesbian realms, and has worked with top-shelf studios like Sweetheart Video, TransSensual, Icon Male, Marc Dorcel, Adult Time, AllHerLuv, and MissaX. Ricky has won multiple XBIZ Awards for All-Girl Movie of the Year, Best Editing, and Director of the Year — Trans three times, as well as Best Girl/Girl Release from the Urban X Awards and Best All-Girl Release Editor’s Choice and Best Feature Production Fans’ Choice from the NightMoves Awards. He’s also received over 300 award nominations for his directing, scenes, art direction, screenplays, cinematography, and editing in all the genres he works in from AVN, XBIZ, TEAs, Fleshbot, NightMoves, XCritic, Urban X, and Inked Awards. In 2021, Ricky was interviewed by Hustler in a piece that captures the iconic director in his element.