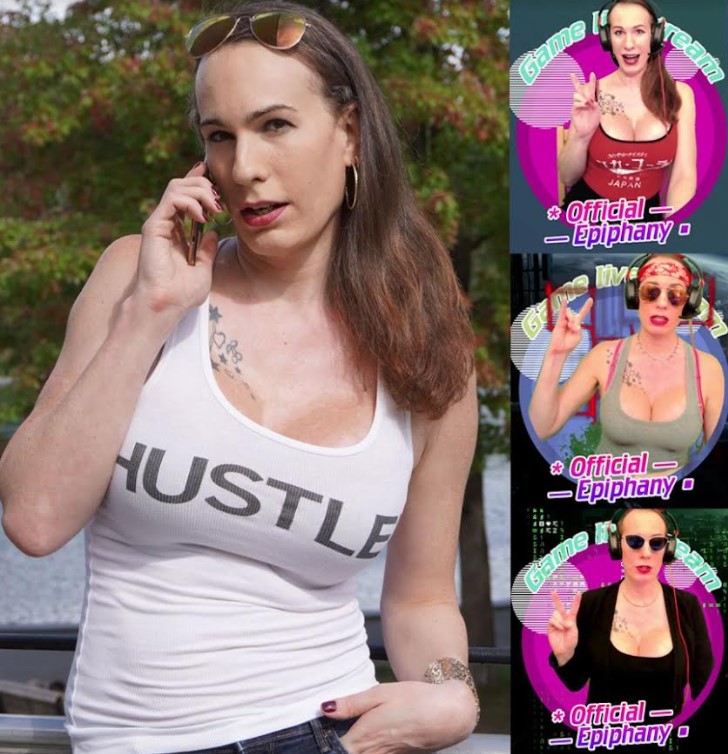 At the cusp of her fourth year in professional adult entertainment, Ms Epiphany expressed sheer elation “Missy and Hustler are such a winning combination, it was an absolute pleasure to be invited back for my second interview” Julia gushed, adding “being a cam star lets us be creative in so many ways! I hope my experience with digital art inspires both fans and performers alike.”

The premium article which showcases Julia and another 6 artists can be found at:
– https://hustlermagazine.com/articles/art-is-sexy-part-iii

Julia also recently earned a pair of nominations to start 2022: One a nominee for fan-voted AVN Awards for “Favorite Trans Cam Star”, a repeat for Ms Epiphany from her debut year in 2019, and will be held January 22nd. Another, finalist for Trans Erotica Awards for “Best Cam Performer”, a new category for Julia for the TEAs, and will be held live at the iconic Avalon in Hollywood on March 13th.

Canadian-born with dual Spanish citizenship, Julia is a fierce feminist, trilingual fluently in English, French and Spanish, and boasts an athletic 5’11” tattooed 38D-30-36 figure, with a pierced left nipple and pierced cock.

Julia’s very first adult-industry nomination, after only a few of months of camming, was for Cam Star Of The Year (Trans) hosted by the YNOT Cam Awards, a red-carpet award ceremony held in Hollywood California.

While in Hollywood to attend the YNOT Cam Awards, Julia was crowned by CAM4 to be the August 2019 CAM4 cover girl, honoured to be their first trans cover girl ever.

A few months later in February 2020, Julia was a finalist for a Live Cam Award as Best Trans Live Cam Model, bringing the total nominations for Julia’s first year in professional adult performance to five.

Soaring into her second year, Julia continued to shine despite her mid-winter eviction barely a few days before the pandemic: in July she earned her sixth nomination being a finalist for the XBIZ Cam Awards for the Best Trans Cam Model award, in September she launched an ‘Official Epiphany’ brand with online merch store, and awesomely Ms Julia Epiphany in October shook the industry by branching into new territory offering financial domination custom videos up to $100,000 for one 5-minute order.

Now sailing through to her third year, Julia partnered with AIPDaily as a guest columnist, was honoured by CAM4 as their Viewer’s Choice Trans Broadcaster (North American) for 2020, was featured for the first time on the cover of a DVD, and has given interviews across the entire industry including mainstream sites like Fleshbot, CAM4 Radio’s Licked & Loaded, and Bang.com.

A passionate gamer, Julia is currently exploring livestreaming using her flagship Official Epiphany brand, and has published several hours of video with cam overlay to her YouTube channel.

Midway through her 3rd year, Julia earned her eighth nomination, this time for the 2021 YNOT Cam Awards as a finalist for the venerable Creator Of The Year (Trans) award, the award ceremony livestreamed on October 14th.

Without skipping a beat, in early January Julia smashed through into 2022 by earning her 9th and 10th nominations: Fan-voted AVN Awards for Favorite Trans Cam Star, and Trans Erotica Awards for Best Cam Performer. Voting open to the public for both.