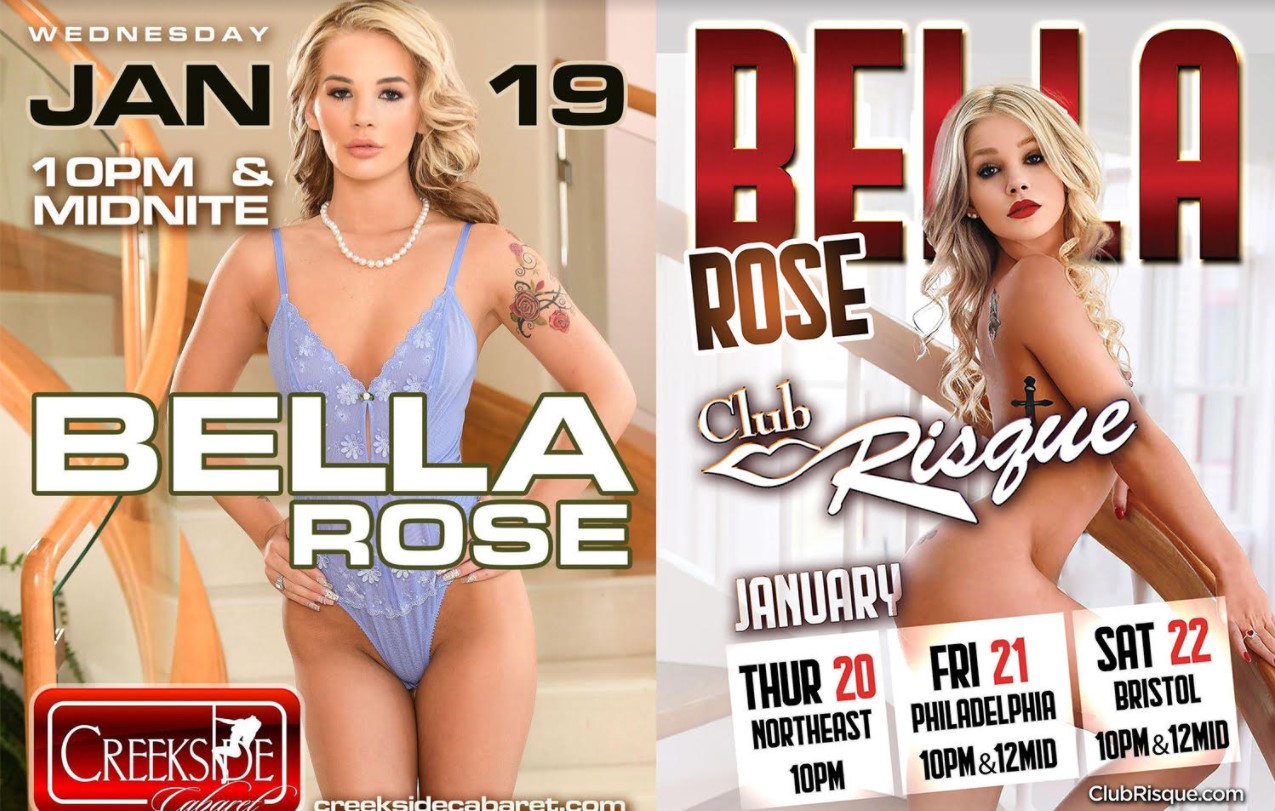 On Weds, Jan 19, the popular adult film star will headline at Creekside Cabaret in Hatfield, and on Thurs – Sat, Jan. 20 – 22, she will bring her tour to the Delaware River, by taking the feature stage at all three Philly-area Club Risqué locations.

“I am so excited to perform in Pennsylvania this week,” said Rose. “I don’t understand why W.C. Fields had a problem with the City of Brotherly Love; I think it’s terrific — and I really hope someone will finally take me to see the Liberty Bell!

“I’m thrilled to be doing special performances just for my wonderful East Coast fans,” Rose added. “In addition to my dance shows, I’ll have merchandise on hand, I’ll be signing autographs, posing for photos, and doing meet and greets. I hope to see all my #BellasFellas there!”

Don’t miss your chance to meet the sweet and charming Bella Rose live and in-person!

The blonde star also invites fans to get an intimate look into her life and career via her premium OnlyFans account.

Rose, who recently returned to full-time shooting, treats admirers to an unprecedented level of exclusive access via OnlyFans, which she updates daily with images and videos that you won’t see on her on public accounts. Fans can direct message the 25-year old Carolina mountain beauty, subscribe to her content, buy clips, order custom videos, and more.

Rose’s fans — known affectionately as “Bella’s Fellas” — can stay up-to-date with her on Twitter: @BellaEliseRoseX and Instagram @bellaeliserose.

Adult film star, webcam model and feature dancer Bella Rose hails from North Carolina, the Tar Heel State. She began her career in adult entertainment as a webcam artist, creating the persona “CupcakeBarbie” on the day she turned 18.

“I quit both of my jobs the next day,” Rose later revealed.

Rose was featured on the cover of the October 2017 issue of Hustler’s Barely Legal magazine, and made her feature dance debut in November of that year. In 2018, she was nominated for AVN’s Best New Starlet.

She has a background in musical theatre, and still loves listening to musicals on her Pandora. Her hobbies include four-wheeling, fishing, and spending time with her beloved Tennessee Walker, named Prim Rose.

About The Lee Network

Since 1989, The Lee Network has been the premier source for adult film stars, having played a leading role in shaping the feature entertainment business of the gentlemen’s club Industry around the globe. From legends of the past to modern stars of today such as Adriana Chechik, Jessica Drake, and Tori Black, to top magazine models, showgirls, mainstream celebrities, and reality TV reality stars, no other agency can boast such a star-studded lineup.

The company’s resources are unmatched, and its clients rank among the very best, most well-established and respected club owners and managers in the business — many of whom have worked with The Lee Network for over 15 years!

For a complete list of talent represented by The Lee Network, visit its official site: www.TheLeeNetwork.com.