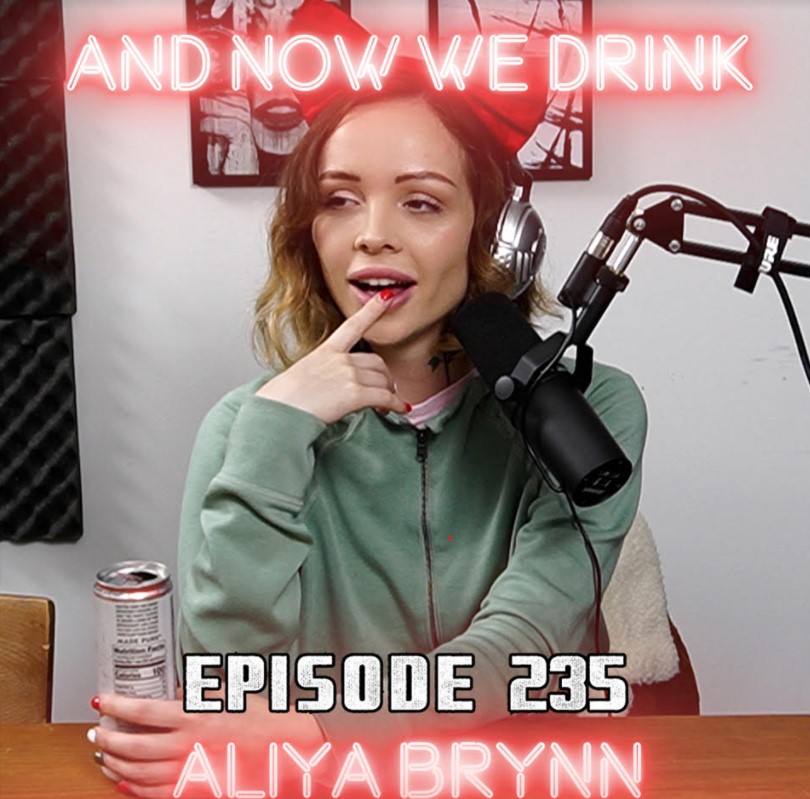 Chicago — Aliya Brynn is the featured guest on the latest episode of Matt Slayer’s popular “And Now We Drink” podcast, now streaming.

“And Now We Drink” is like ”the conversation at the end of the bar” with your favorite comedians, musicians, writers, actors and adult performers. Episode 235 finds the young star in a playful mood, trading rapid-fire barbs with the recently COVID-stricken host.

The informal chat allows Brynn and Slayer to cover a variety of topics ranging from how Aliya spent her 22nd birthday, the inaugural X3 Expo, and her love for furry things . . . particularly her dog and three cats. And one of her beloved felines, Sunny, makes his podcast debut on the video version of the show.

Aliya also gives the racy details of an Uber ride-turned-lap dance, then explores her body a bit before deciding she needs food. But first! . . . she must decide the age-old quandary: Mac or Pizza?

“Aliya is the best,” raved Slayer. “Although the episode had to happen remotely, it truly felt like we were in the same room. I look forward to having her on the show again in person so we can get extra silly.”

Brynn commented, “It was good to chat with my buddy Matt and share stories about my crazy life. And it’s nice to be able to invite my fans to get a taste of my real-life personality, and introduce one of my cats to the world!”

Enjoy the rollicking hour-long Episode 235 of “And Now We Drink” at the program’s official website: www.andnowwedrink.com/episodes.

The video version of the podcast is available via Slayer’s Patreon.

Read the latest news from the “And Now We Drink” show on Twitter: @AndNowWeDrink

A talented content creator, Brynn’s self-produced work can be found at her ManyVids store.

An all-natural beauty with a flawless 32B-24-34 figure, blue eyes, and a gorgeous smile, adult film star Aliya Brynn is a native Californian of Russian and Norwegian descent.

A dynamic sexual performer, Brynn owes her famous flexibility to years of gymnastics, dancing, and cheerleading. When she turned 18, Aliya started a premium Snapchat and began selling nudes online, which allowed her to buy her first car.

In 2020 she was nominated as ‘Hottest Newcomer’ in the AVN Awards and ‘Best New Starlet’ in the Fleshbot Awards, in addition to servicing as a trophy girl at the AVN Awards gala in Las Vegas.

Brynn’s hobbies include pole dancing, watching Netflix, and shopping. Her favorite types of music are rap/hip hop and anything she can dance to. Her favorite foods are sushi, steak, and spaghetti.