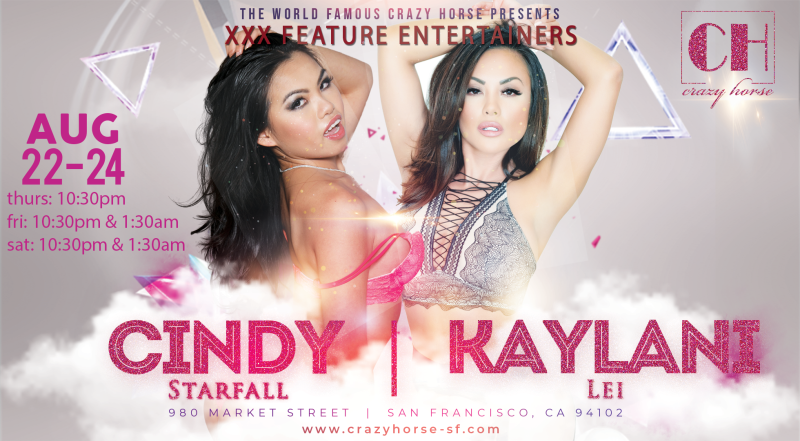 Chicago – Acclaimed Feature dancer and adult actress Cindy Starfall (https://cindystarfall.net/) will join Kaylani Lei for an exciting set of shows at the Crazy Horse Gentlemen’s Club. August 22nd through the 24th, Cindy, and Kaylani return to San Francisco to seduce fans with their arousing moves and teasing ways. Both women have performed their striptease shows all across the country to packed houses. Now the duo have come together to make sure the Crazy Horse is the only place to be in San Fran.

“I love everything about San Francisco, especially the Crazy Horse,” said Cindy. “It’s one of my favorite venues to perform at. And I’ll be there with one of the most beautiful women in adult entertainment, Kaylani Lei. This weekend is really going to be an exciting one. We are going to put on some incredibly sexy shows. Fans are going to go wild.”

Crazy Horse is located at 980 Market St. in San Francisco. More information on the venue can be found on the club’s official website: https://crazyhorse-sf.com/.

About Cindy Starfall:
A former Catholic schoolgirl with an insatiable sexual appetite, Cindy Starfall has all the makings of an adult entertainment superstar. Born in Saigon, Vietnam, Cindy immigrated with her family to America at age fifteen. Raised in a strict Vietnamese household, the 4’11” raven haired minx of mixed Thai, Chinese, and Vietnamese descent found herself with a desire to explore her sexuality. After a stint at a corporate job, Cindy began experimenting with adult entertainment. Starting as a glamor model, Cindy moved to webcam work before launching her career as an actress. Cindy has appeared in adult films for top companies such as Filly Films, Mile High, Evil Angel, Hustler, Digital Playground and Wicked Pictures. This petite performer’s 2015 showcase, Starfall, was celebrated with three nominations at the 2016 AVN and XBIZ awards. Her movie Starfall won Asian-Themed Release of the Year at XBIZ awards 2016. Cindy rebooted her hardcore image by re-launching CindyStarfall.net. She created the site to satisfy her fans’ desires. The site features a highly interactive membership portal and webstore where fans can purchase Cindy’s personal items, including a heat-activated magic mug that undresses Cindy and her men’s t-shirt line. She also has CindysFlix.com which will allows fans to purchase content on demand, allowing users to pay for only the clips they wish to download. When she is not shooting steamy hardcore content, Cindy can be found feature dancing at exotic clubs across the U.S. An open swinger, Cindy is also a regular at upscale lifestyle parties and loves celebrating her sexuality with fun, open-minded couples.