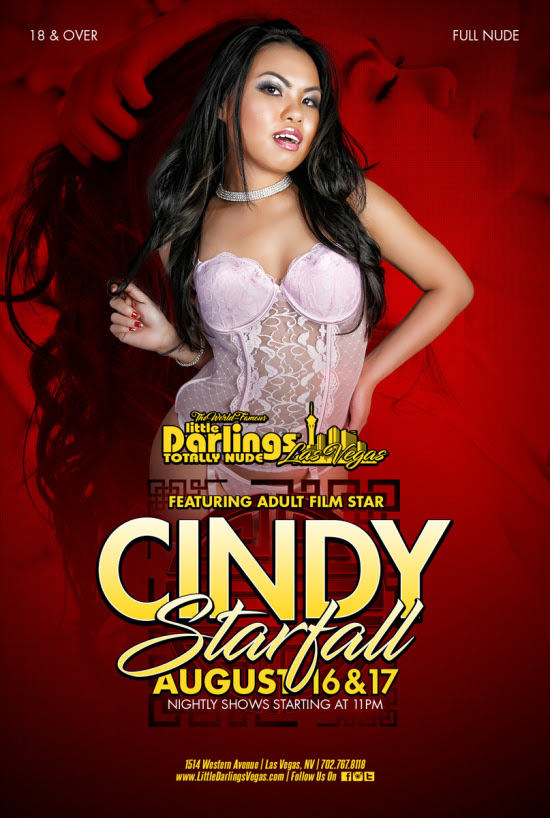 Chicago – Headlining superstar Cindy Starfall (https://cindystarfall.net/) will be appearing at Little Darlings Las Vegas August 16th & 17th. For two nights the accomplished Feature entertainer will dazzle the gentlemen’s club attendees with her seductive striptease show. Cindy will tempt and tease fans as she peels off her skimpy outfits and struts across the stage.

“I’m back in Las Vegas this weekend and I can’t wait,” said Cindy. “It’s been a while since I have seen my Vegas fans. I wanted to come back for some more sexy fun. It’s one of my favorite cities. Everyone there is ready to party and have a great time. At Little Darlings, that’s exactly what’s going to happen!”

When the show ends, the excitement continues as Cindy will hold a special meet and greet. After every performance fans will have the chance to talk to the star and get autographs or selfies. They can also purchase Cindy merchandise like 8×10 photos and her hardcore DVDs. Those looking to make sure their night will be a memorable one can also get a VIP lapdance from Cindy.

Little Darlings is located at 1514 Western Ave in Las Vegas. Additional information about the club and Cindy’s appearances can be found on the venue’s official website: https://littledarlingsvegas.com/events/featuring-cindy-starfall.

Those that want to publicly show their love for Cindy can do so by ordering her new T-Shirt. Now, fans can have Cindy all over their chest anytime they want. The “Hot AF” shirt features a scorching image of Cindy in red lingerie and heels showing off her best assets. The limited-edition shirt is available in several sizes and can be purchased here: https://cindystarfall.net/product/hot-af-men-tee/.

August 16 and 17th Cindy Starfall is coming to Las Vegas! Bet on having an unforgettable time at Little Darlings This weekend!

About Cindy Starfall:
A former Catholic schoolgirl with an insatiable sexual appetite, Cindy Starfall has all the makings of an adult entertainment superstar. Born in Saigon, Vietnam, Cindy immigrated with her family to America at age fifteen. Raised in a strict Vietnamese household, the 4’11” raven haired minx of mixed Thai, Chinese, and Vietnamese descent found herself with a desire to explore her sexuality. After a stint at a corporate job, Cindy began experimenting with adult entertainment. Starting as a glamor model, Cindy moved to webcam work before launching her career as an actress. Cindy has appeared in adult films for top companies such as Filly Films, Mile High, Evil Angel, Hustler, Digital Playground and Wicked Pictures. This petite performer’s 2015 showcase, Starfall, was celebrated with three nominations at the 2016 AVN and XBIZ awards. Her movie Starfall won Asian-Themed Release of the Year at XBIZ awards 2016. Cindy rebooted her hardcore image by re-launching CindyStarfall.net. She created the site to satisfy her fans’ desires. The site features a highly interactive membership portal and webstore where fans can purchase Cindy’s personal items, including a heat-activated magic mug that undresses Cindy and her men’s t-shirt line. She also has CindysFlix.com which will allows fans to purchase content on demand, allowing users to pay for only the clips they wish to download. When she is not shooting steamy hardcore content, Cindy can be found feature dancing at exotic clubs across the U.S. An open swinger, Cindy is also a regular at upscale lifestyle parties and loves celebrating her sexuality with fun, open-minded couples.