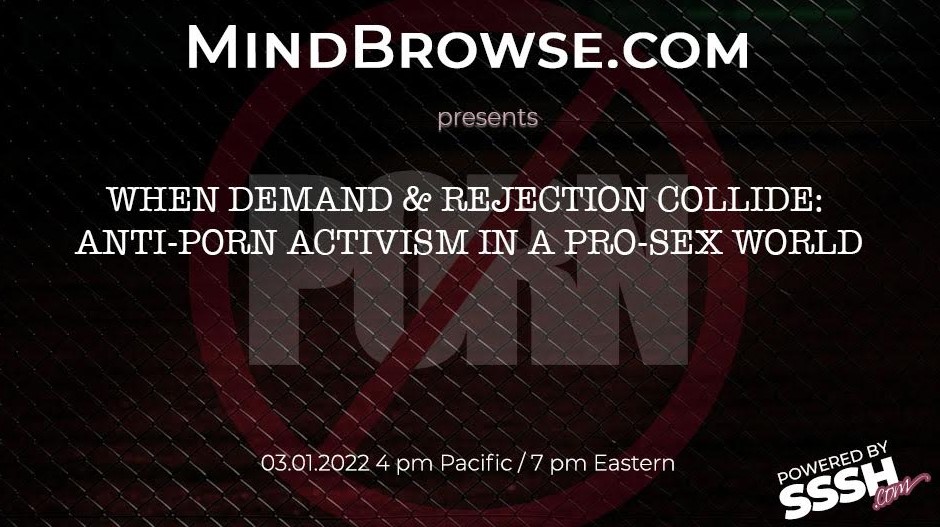 Chicago – Mindbrowse and Sssh.com are pleased to announce they will be hosting the live stream discussion, “When Demand & Rejection Collide: Anti-Porn Activism in a Pro-Sex World” on March 1, 2022 at 7 pm ET/4 pm PT.

The event was originally to be held in January during XBIZ LA as the organizations’ 9th annual, collaborative “big picture” seminar. Now, the event will take place virtually and will be available to watch via live stream on Twitter at @ssshforwomen. A recording will be available after the event on both Mindbrowse.com and XBIZ.tv.

“Historically, the wider social world has always had an uneven relationship with the adult industry community and sex media, one that vacillates between two broad perspectives: anti-pornography activism and pro-pornography fascination,” Dr. Tibbals explained.

“Our wider social world is currently in a period of anti-porn sentiment, one that’s being elevated by noteworthy mainstream media outlets alongside banking and payment processing entities. All this, while sex work is more visible — and more visibly leveraged — than ever,” Dr. Tibbals continued. “We’re going to be discussing various tensions that emerge when society continues to double-down on ‘hating’ something that it clearly loves – and I’m so excited that we’ve opted to reschedule this event and have this discussion with our community.”

During “Anti-Porn Activism in a Pro-Sex World,” speakers will discuss current tensions existing between the industry and the wider social world, including the blurred lines emerging when variable individual demands for sex work (from consumers as well as workers) brush up against wider social repudiation. Speakers will also discuss strategies to continue moving forward as a productive community in this current social climate.

“Our intention with our live-broadcast Mindbrowse events is to provide a platform for a diverse array of perspectives from our community to deep-dive relevant topics – and to make that discussion as accessible as possible via technology,” said Sssh.com’s owner and award-winning director Angie Rowntree.

“The idea of enhancing accessibility via technology has finally become normalized, and we will continue to press that message alongside nuanced discussion of issues that impact our entire community,” Rowntree continued. “We are so excited for this rescheduled event!”