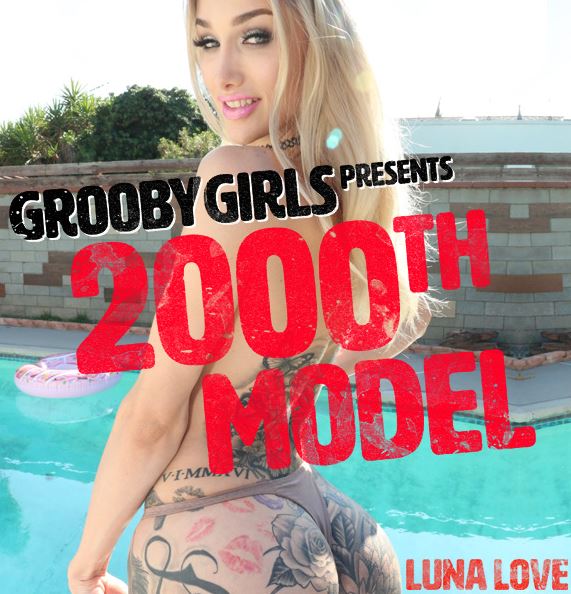 Chicago – Grooby celebrated its 2000th unique model on its flagship site, GroobyGirls.com, this past Saturday with Los Angeles newcomer, Luna Love. The site averages 90 new models a year and is the industry’s leader in trans erotica for the last 23 years.

“Grooby Girls’ mission has always been to show the widest range of attractive trans woman we can,” says Steven Grooby. “Whether it’s brand new girls or established stars – we’ve always been open to showing models of different body sizes, stages of transition, from different areas, niches, types, and roles. The site has no equal – and I don’t believe ever will. While we’ve received snide comments from some in the industry, the same people also use Grooby Girls as a temperature gauge to see who will work in their productions (late to the game!). We know that it’s not always the star that’s going to create the biggest buzz, it’s the girl that stands out from the rest.”

“We average about 90 new models a year, which averages approximately 7.5 new models every month for the past 23 years,” explains Grooby. “Although considering in our early years, when we updated once or twice a week girls were hard to find, waiting for new content right up to the wire, I believe most of these 2000 unique models have come in from the last 15 years. We now receive over 50 applicants a week for our US-based sites alone.”

At the current rate of updates, GroobyGirls.com will celebrate its 3000th unique model in 2031.

ABOUT GROOBY
Founded in 1996, Grooby is the leading producer of trans erotica. In addition to operating over 30 membership sites, the company produces nearly 50 DVDs a year and hosts the annual TEAs (Transgender Erotica Awards) held in Hollywood, CA. More information about the three-day event can be found at theTEAShow.com.

In 2017, the company took over the editorial content for Transformation, the world’s most popular transgender lifestyle magazine. For more information, visit Grooby.com or follow them on Twitter at @GroobyDotcom.