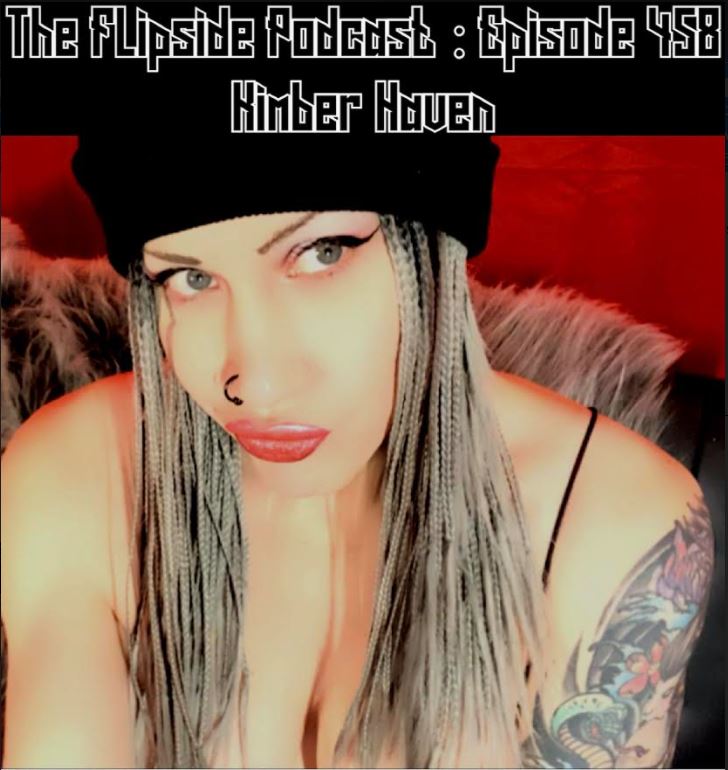 Chicago – TS performer, director, producer, and radio show host Kimber Haven is the latest guest to sit down for an exclusive and in-depth interview with TheMediaJack host of The Flipside Podcast.

“The Flipside Podcast – Episode 458: Award-Winning Content Creator & Trans Legend, Kimber Haven” is 40 minutes of solid entertainment. Wearing a BMG beanie and a white crop top, Kimber is her usual charming self, and TheMediaJack appreciates her humor and candidness. The two discuss her life before adult as a cage fighter and celebrity bodyguard and retiring at 40. Both viewers and Kimber’s fans will definitely get an education on adult filmmaking—TheMediaJack certainly did. Kimber touches on performing on set and the physical challenges, being in front of and behind the camera, appreciating your fans, diversifying your portfolio with multiple platforms, and stepping into the role of savvy marketer. She keeps the host laughing with her tales on set and her radio show, The Totally Inappropriate Radio Show. Kimber also gives a rundown of how it is to produce and direct her films, negotiate a budget, make her scripts a reality, and a sneak peek into her new Dungeons and Dragons gaming big-budget feature she’s currently working on. Among other topics discussed are thriving during COVID and Kimber getting a year off from tradeshows and other industry events to focus more on her craft.

“This interview was entirely too much fun! Whether you’re a loyal fan or you’ve never heard of me, you’ll love this episode of The Flipside Podcast. It was fun to educate TheMediaJack and his viewers on the industry, what really goes into making films, and diversifying how you make money. I love making people laugh, but I always hope they walk away from my interviews with more knowledge,” says Kimber Haven.

Watch “The Flipside Podcast – Episode 458: Award-Winning Content Creator & Trans Legend, Kimber Haven” at youtube.com/watch?v=JGPv2MmzxGc. And go to youtube.com/user/TheMediaJack to subscribe to TheMediaJack Channel and watch other episodes with adult stars, musicians, and more as guests.

ABOUT KIMBER HAVEN
Kimber Haven is a chameleon, and her looks vary from edgy rocker to girly girl to leather-cracking domme and everything in between. She’s known on screen for her height (she stands at 6’8” in heels), wild personality, large member, and extreme cum shots. Before entering adult, Kimber was a heavyweight cage fighter and celebrity bodyguard.
Kimber is one of the most memorable performers in adult and has appeared in scenes on multiple Grooby sites and DVDs, WendyWilliams.com, Shemale Strokers, Sexpose TV, and her ModelCentro site, Kimber’s Playroom kimberhaven.com. She’s a frequent cam model on Chaturbate tskimber.com and enjoys lighting up the stage with her featuring dancing and doing stand-up comedy. In 2016, she started her production company, Bad Girl Mafia Productions, and weekly radio show, The Totally Inappropriate Radio Show, which is heard by 400k listeners worldwide on the Demon Seed Radio Network demonseedlive.com Saturdays at 3pm PST/6pm EST.
Kimber’s an award-winning performer and cam model with two Fetish Con Awards for Best Transgender Fetish Alternative Performer and Best Transgender Alternative Cam Performer, as well as four Grossy Awards from Gross Misconduct Show and was inducted into their Hall of Awesome. Kimber has also received numerous nominations for herself and her studio, Bad Girl Mafia, from the AVN, XBIZ Cam, TEAs, NightMoves, and Urban X Awards. She’s also graced the pages of Hustler and Transformation.
Support Kimber by subscribing to her Only Fans onlyfans.com/kimberhaven and buying her clips on Clips4Sale clips4sale.com/studio/105674/kimbers-playroom and ManyVids manyvids.com/Profile/1000380134/kimberhaven/Store/Videos. Enjoy her videos on Pornhub pornhub.com/users/kimberhaven. Keep up with everything in her universe by following her on Twitter @kimberhaven and Instagram @tskimberhaven, and like her Facebook Page at facebook.com/Kimber-Haven-656981584403857.