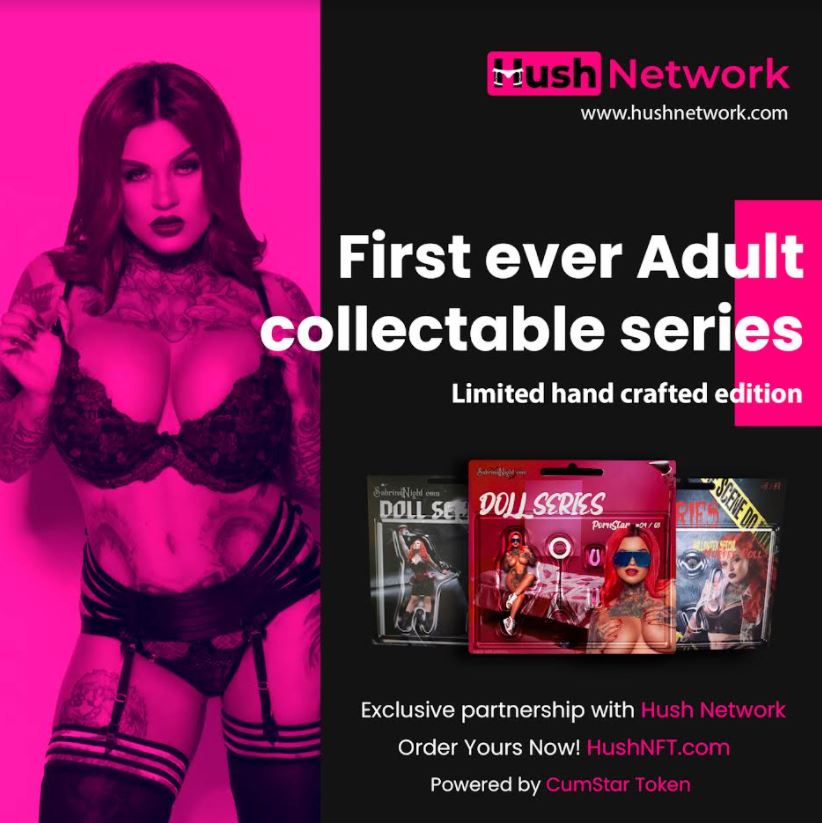 Set to make history, Sabrina Night is the first adult content creator to release a long and complex series on the NFT market, and she’s partnered with the Hush Network powered by $CumStar Token to make her dream a reality. Sabrina’s NFTs are uniquely handcrafted (unlike most that are automatically generated) and highly collectible—the Doll Series of 69 various NFT Dolls with three items per box. She’s already done two drops and sold one set of three almost immediately. Her next drop is a special edition set for Halloween. After that, she will be doing a drop every two weeks through June of 2022.

Each Doll Series of three NFTs ranges in price but starts at $1k, with special editions like the first drop, Halloween, and Christmas at higher price points. The total estimated value of all the NFT Doll Series is estimated to be worth $80k to $90k with the resale value being much higher.

“I’m elated about my partnership with the Hush Network. There are tons of NFTs on the market, but none like mine. Hush let me run with my creative ideas, and it’s been well received. It’s exciting to be involved in such a ground-breaking project. I really hope my collection is just beginning and will show the potential our industry can find in creating NFTs,” says Sabrina Night.

Another place you’ll find Sabrina is listed as a nominee in the 2021 Fleshbot Awards. She’s nominated for Cam Model of the Year and Best Fansite Presence. Voting ends tomorrow, so register today, head over to fleshbotawards.com, click on the “Trans” tab, and look for her nominations to #rockthevote for Sabrina.

In the past two years, Sabrina’s become very welcome very well known in and out of the adult industry and scored countless magazine covers and features for worldwide publications like XBIZ, B.A.D.D., Bubble Shake, Inked Barbie, Kink Queens, Femme Rebelle, Tattoo Planet, Tattoo Kultur, Kinkd, and more. She’s won awards for Best Overall Model and Best Porn-Cam Model from Spain’s Ero Awards, Fetish Model of the Year from UK Glamour Awards, Best Gothic Shoot from the AltPorn Awards, and MV Munkbung Vid of the Year from the ManyVids Community Awards. Sabrina has received numerous nominations from XBIZ Europa, XBIZ Cam, Fleshbot, AVN, AltPorn, YNOT Awards, Bucharest Summit, and Inked Awards. She’s currently an Advisor for SugarBounce and has a partnership with the Hush Network for their hand-crafted NFTs. Previously, she was the first official Cherry.tv Ambassador and a Brand Ambassador for xxxNifty. When she’s not producing content for her platforms or filming for top studios, you’ll find the globetrotting foodie/master chef in her kitchen whipping up culinary delights. Before adult, she was an ALT model and went to art school. She’s also appeared in a Harry Styles music video, appeared on UK’s Channel 5 on “Hotter Than,” and has appeared in The Sun.