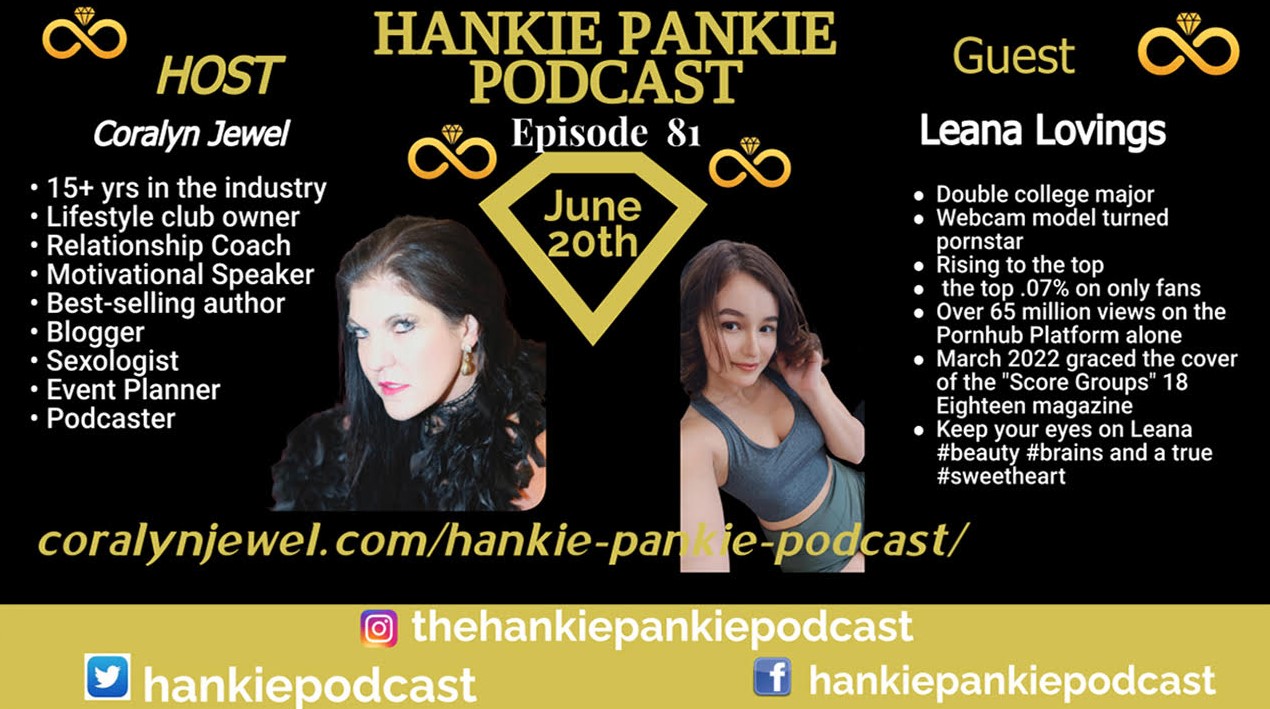 Jewel’s show helps breas down the stereotypes and misconceptions in regards to those involved in the adult industry, KINK, fetishes, and alternative relationships.

“This interview felt like one of my most natural and forthcoming so far,” said Lovings. “I love the natural flow we carried together. We could have spoken for hours and it’s a shame there was only such limited time to discuss everything.

“Coralyn was wonderful and like her namesake she’s an absolute Jewel. She and I connected on many levels and most of all we loved talking about sex therapy and relationship coaching. If you’d like to hear more about it, and for anyone interested in knowing more about me, it’s a ‘must-listen.”

“She came in at number two this week missing getting a tie with Angela by just one vote. The vote tallies are determined by the customers combination of views to products, streaming, and DVD sales.

Connect with Leana Lovings on Twitter: @LeanaLovings.
Catch Lovings on Chaturbate and join her Famclub: https://chaturbate.com/naughtynightlover/
Leana Lovings fans are invited to check her out on FreeOnes: https://www.freeones.com/leana-lovings and peruse her self-produced videos on ManyVids ( https://www.manyvids.com/Profile/1001093063/naughtynightlover/Store/Videos/ ).
Lovings treats admirers to an unparalleled level of access via her OnlyFans account ( http://onlyfans.com/leanalovings ), which is updated daily with images and videos that you can’t see on her public accounts.
With her popularity skyrocketing faster than gas prices, fans are invited to subscribe to Lovings’ verified Pornhub page ( https://www.pornhub.com/pornstar/leana-lovings ), view her videos and check her progress.
She is represented by AMA Modeling ( https://amamodeling.com/project/leana-lovings/ ) / @TeamBrian2016 for East Coast shoots, and 101 Modeling ( https://www.101modeling.com/site/talent/view.php?t_id=1412&pageType=profile ) / @101ModelingInc for West Coast shoots.

One of the fastest-rising stars in adult entertainment, Leana Lovings was already an immensely popular webcam performer with over 200,000 followers on Chaturbate before taking the plunge into the World of X in September 2021.

Lovings grew up in the rural southeast, and attended university with double major in Biology and Psychology and a specialization in Neuroscience. Camming represented “a way to explore my sexuality in a safe way, while creating something that feels like a very intimate and even comforting experience for the viewer,” Lovings said.

Having been raised in a religious environment, Lovings said that “sex work healed me in a lot of ways. It taught me how to care more for myself — exercise, self care — and how to have more confidence in myself.”

In March 2022, Lovings graced the cover of The Score Group’s iconic “18 Eighteen” magazine. She is currently the cover girl for the May issue of Hustler’s “Barely Legal” magazine.

In May, Lovings served as trophy girl at the adult industry’s X-Rated Critics Organization (XRCO) Awards in Hollywood, and was a featured speaker on two panels at the YNOT Summit.

She resides in South Florida.